Dreaming of a new bathroom

Our family bathroom sucks.  Don't get me wrong, I appreciate that we have a bathroom,  I especially appreciate that we have a main (family) bathroom, a separate shower room off our bedroom and a downstairs loo.  With four of us in the house, it's so handy and will only become more so as the boys grow... But, back to my opening statement, the family bathroom sucks.

It's dated and old.  It's ugly.  It's clean but never looks it due to (despite much bleach and elbow grease) black mold everywhere.  The loo seat moves  when you sit on it.  The taps don't match.  The cold tap at the basin has started to leak.

I don't even want to show you a photo... so here's Felix in the bath: 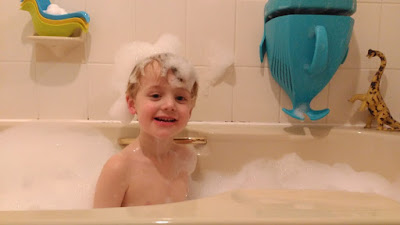 I like to fantasize about the day we can afford to get it done up.  We've had quotes (you can easily get quotes at myjobquote.co.uk) and we have a good idea of the cost.  We just can't afford to do it right now.  Another reason to get earning that dosh when Felix starts school...

In the meantime, we've decided it's not worth a "for now" fix like we did with our (also dated) shower room.  I just close the door on it, spend as little time in there as possible and spend time on Pinterest fantasizing about the bathroom we will have.... one day.....