What is it about men and their man rooms?  They have various names for them; "man cave" "dad's den", actually, don't quote me on that one, I totally just made that up..  Well, my husband has one and he calls his "The Manarium".  It's better than man cave, I've got to be honest.  And, after a discussion with him, it appears that "you have the rest of the house,  I need some space of my own".  I've not retorted with "but don't you see that I have to share the entire house with everyone in the family?" as I couldn't be bothered at the time. Maybe I'd had a gin and just didn't care enough.. and, to be fair, I do generally have more say over the decor and I do fill the house up with more bits of tat than he does.

Men do seem to like their little (smelly) places to retreat into and quite frankly, if it means the rest of the house isn't covered with various gaming detritus and half working Amigas then it's a happy compromise.  My husband has his manarium in our loft.  He has a fair old bit of room up there, you can even stand up and, as he's just shy of 6 foot that is a good thing!  It's been an ongoing project ever since we moved in two years ago.  In fact, he had already earmarked the space when we originally looked around the house.  I think that's why he was so keen on it, that and the log burner.

At first, he just used it to store his crap important IT shizzle.  But this year, with us being a bit more settled in the house, he's been beavering away up there.  All his games have been sorted out, he's put shelving up, put an electrical socket up there, installed a projector, put down carpet, sorted out lighting, mounted a TV, got beanbags.  It's a wonder I ever see him actually.

There's just one thing he won't stop going on about.  It's dark up there.  In the summer, it's insufferably hot.  It's stuffy.  He doesn't like to stay up there too long because he craves some day light and fresh air.

He wants a window.

You wouldn't believe the amount of conversations we now have about windows.  Or, maybe you would.  Adult life seems to be just full to bursting with inane exchanges.  And even disgusting ones.  Conversations about your child's poo anyone?  He does harp on though.  We know it'll happen, it's just a case of saving up.  Putting a window in up there isn't priority No.1.  However, I know how happy it'll make him so it'd be nice to do sooner rather than later! 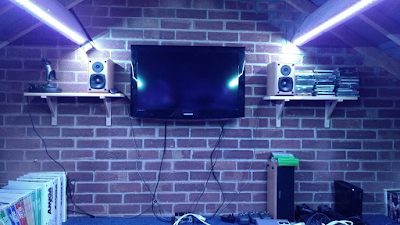 Pete wants to have a velux window fitted.  He's spotted one he likes on the Roof Windows website: 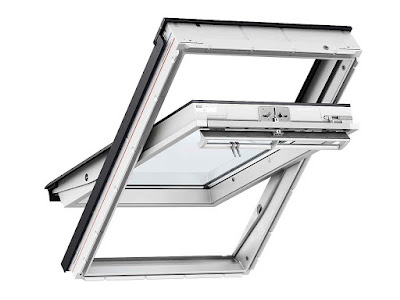 I think, once he's got the window fitted, he'll probably live up there, like some kind of loft mole.  He tells me I can visit though, to watch the odd movie.  Lucky me!  Beanbags on the floor and a movie.  It'll be like being 18 again!  I'm not sure I want to be 18 again.  Maybe child-free again... Ha.  I jest, I love them, I LOVE THEM!


Well, if he spends more time up there, I might get some more blogging done, hey?  Win win.... Anyone else worked on a project similar to this?  Got any tips or suggestions?  Do let me know below!
Posted by Unknown at Friday, September 29, 2017