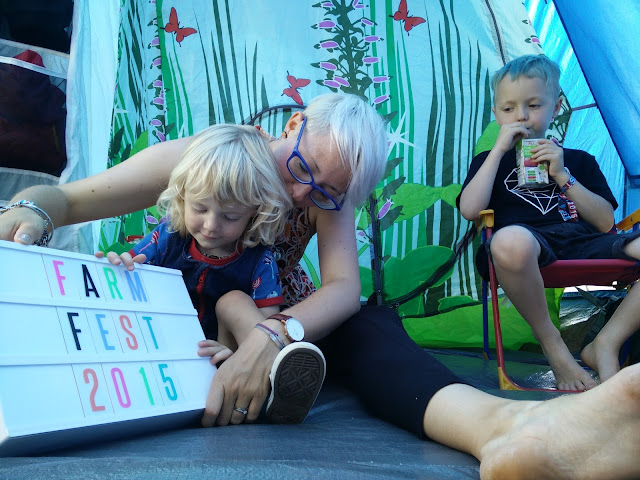 I'm very happy to tell you that we have finally achieved one of my ambitions in life - a festival, camping with the family.  I've never been to a festival properly before.  I've been to small festivals and middle sized ones, but only ever for the day or not camping.  For as long as I can remember I've wanted to  (unwisely?!) camp at a festival and, once we had the boys, I wanted to do it as a family.  And we have finally done it!

I can't say it was easy.  If you read my blog you'll probably know that Felix is, well, quite hard work.  He's a complete delight and I love him to pieces but he is a very full on child.  He requires a great deal of attention, he doesn't sleep well (having only "slept through" a handful of times during his 26 months on this earth) and he doesn't ever stop moving.  Even when sleeping he fidgets around so much he wakes himself.  I knew that I wouldn't consider a festival with him as a tiny baby (although, ironically, that might actually have been easier!).  I was hoping that by age two it'd be easier.  It wasn't.  But it was fun.


Farm Fest is a reasonably small festival with an attendance of about 5000 people.  It has been around for 10 years now (10th birthday this year!) and it is quite local for us (an hours drive).  It is also renowned for being family friendly.  For all these reasons I thought it'd be a good choice for us.  Family friendly means that there will be activities for kids and there will be lots of other kids there.  Being local means that if it turned out to be hell on earth we could get home quite easily.  Small means that it wouldn't be too overwhelming for our first proper festival experience. 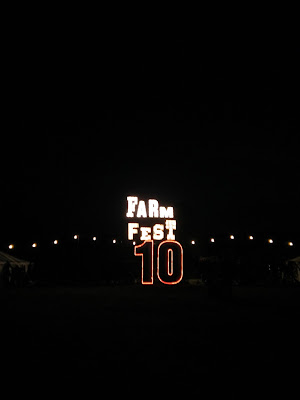 I'm very glad to say that it lived up to our expectations and exceeded them.  It did indeed take us just over an hour to get there and once we found the not entirely obvious road sign on a nearby roundabout it was straightforward to get to.  There was heaps of parking and lots of attendants around directing cars and people.  It was definitely worth getting there early (the festival ran from Friday to Saturday night with camping on both nights) as we got a good parking space (close to camping) and we were able to pick a decent spot to pitch our tent.  There was an excellent security presence on site which I found reassuring, especially having our boys with us.

Heaps of space for camping, even if you did end up a little way from the entertainment you were guaranteed space for your tent. There was a separate camper van field which seemed popular!  I have to say I was very impressed by the toilets and running water with sinks.  Most of the loos were these composting ones which have become popular.  A loo over a hole in the ground.  You do your business and then throw over a cup full of chippings.  I can honestly say that these loos were far less stinky than the traditional portaloos and cleaner too.  Bigger as well!  Outside of the loos there was access to a good amount of alcohol gel and two sinks with running water which were a life saver.  I was constantly filling up our water bottles, washing the kids hands and faces and washing my hands.  Alcohol gel is great and I love knowing the nasties are gone but I'm afraid nothing feels as refreshing as some water!  Sometimes the loos had paper, sometimes not, but even we festival newbies knew to take our own loo roll with us!

Once we'd arrived and lugged all our gear to our tent pitch (the hardest bit - totally getting one of those pull along carts everyone has for next time!) and got our tent up, we went up to the main field to explore.  Just before entering the field there was a fantastic smelling coffee tent.  This was much appreciated by us and everyone at the festival I think!  We were surprised to find the coffee was damn good.  I also sampled one of their salted caramel muffins and it was one of the softest, freshest and most delicious muffin I've ever had! 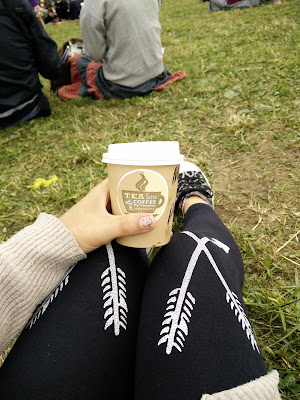 Coffee makes me think of food and there was so much to choose from at Farm Fest it was unreal.  For us, it was as much about food as anything else and we were spoiled for choice.   I went for a fresh pizza for my lunch.  Whilst it was tasty, it was one of the more expensive food choices at £8 (basic pizza was £7, £1 for toppings) and I have to say it took a long time to arrive.  Around 20 minutes I think.  Which isn't easy when you've got grumpy kids swinging around your legs!  I realise that as it was fresh pizza it would take a bit of time to make, but they already had heaps of bases ready and as they are thin they shouldn't take long to cook, so I'm not sure what took so long.  It was nice though.  Good tasty ingredients. 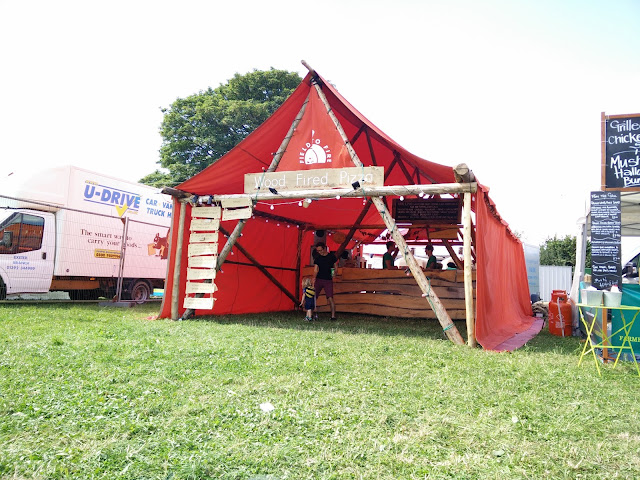 Pete sampled the fish and chips stall.  I know he loved the fish and I helped him munch up the chips as did Felix and we enjoyed them!! Ethan wanted a marshmallow and strawberry crepe so he was very happy.  That also took a surprising amount of time to make but there was a big queue - not that surprising!

After filling our tummies we took a walk around to get our bearings.  There was an amazing disco stage (made to look like a huge pinata) playing vinyl disco classics called Donna Somerset (amazing name).  Felix was fascinated and kept trying to get up there when they weren't actually open.  When they were, they pumped out some awesome disco tunes so there was always a buzzing atmosphere. I'd say it was one of the most popular places there! Everyone was loving it. 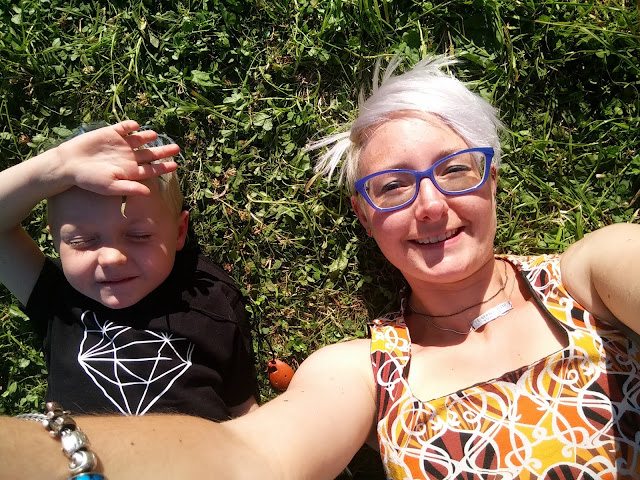 Festivaling with the boys was, as I mentioned, tricky.  Felix was staying true to himself and despite a stinking cold (typical eh?!) was on the move constantly.  For that reason we found listening to the music on the main stage the easiest because it provided him with a good deal of room to run around, lots of people to chat to and the sound of the music wasn't too intense.  Talking of the music, Farm Fest isn't somewhere you go to watch big names perform.  It's much more about up and coming and smaller acts.  Which suited us just fine.  We just enjoyed hearing and seeing good music being played live.   And it really was.  Great strong singers, A good amount of base-y thumpy dance for the nights and lots of beautiful instruments.  We loved hearing some sax!  We saw several of the bands performing on the main stage on Friday and Saturday afternoon.  My brother, who was there with his friend, visited every stage and tent.  They loved the blue and white tent with some gorgeous chilled out Friday afternoon vibes. 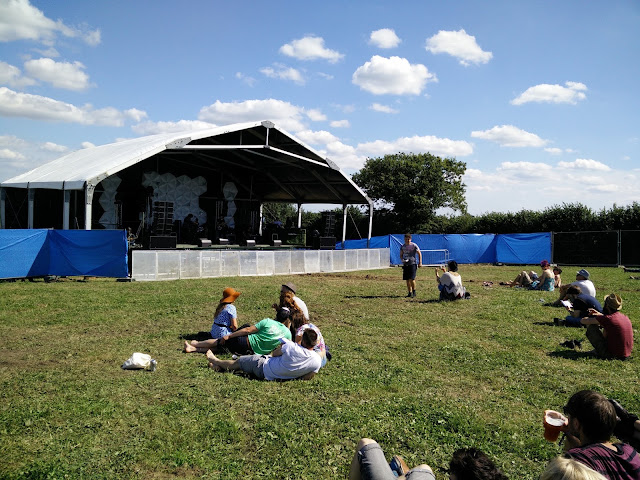 Drink wise, there were several "bars".  Larger was surprisingly well priced, no more expensive than a pub.  You could get all the basics but there was also a beer/cider/cocktail tent supplying more traditional drinks.  I did have a cheeky Moscow Mule cocktail on the Friday night which set me back £7.  Not cheap, but again, that's pretty much what you pay for a cocktail in a bar.  It was yummy and generous on the vodka.

For kids, there was plenty.  A dedicated kids tent and various things dotted around the tent.  The kids tent was great.  Heaps of recycling materials to get creative with, paints, pens, glitter and structured activities such as puppet making, instrument making, sing songs, bed time stories and yoga.  My two just enjoyed making random things from cardboard boxes.  Ethan made a "bird" which he insisted we carry around.  Actually came in hand for sitting on whilst listening to music and later on became a handy door mat for our tent!  Both boys got covered in glitter. 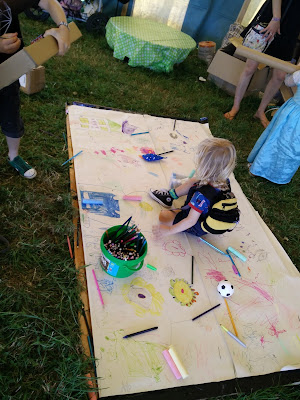 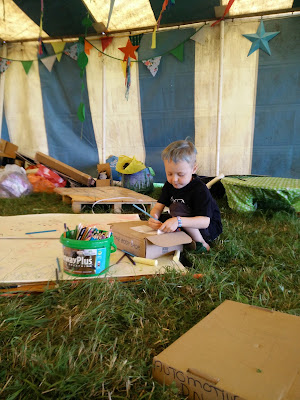 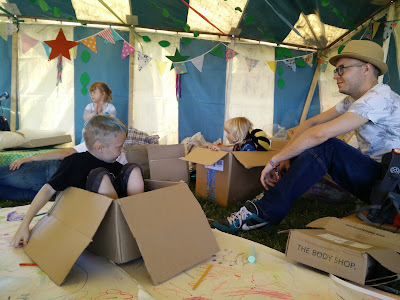 There were a good amount of "shops" to look around selling the usual stuff you'd see at festivals; retro clothing, face painting, tat stuff to attract kids.. but there were also some cool things like screen printing, slack lining and massage.  Ethan loved having a go at slack lining! 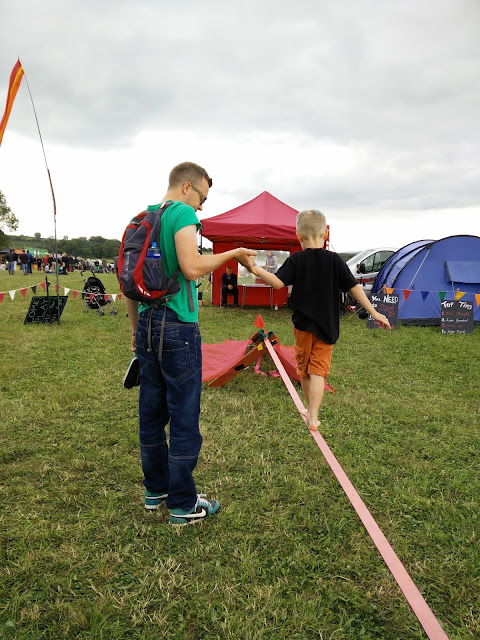 For us, the hardest bit of the weekend was the night.  With hindesight, it probably would have been better to stay out until the boys were ready to drop but what we actually did was head back to our tent at about 6:30pm because Felix was flagging, having a cold.  Once we got back there, though, they went a bit manic and it was 10:30pm before they had conked out.  Neither of them slept well either.  Mostly because Felix was so snotty and feeling ill.  In fact, at one point during the night, Ethan put his ear defenders on to sleep because he hated Felix's snoring!  Once the boys were asleep Pete and I took it in turns to pop back to the action for a bit but I don't think either of us felt like leaving the other with the boys for too long.  Life is different now, and that's OK!  I bought us both a deep fried mars bar from the chippy -  you've got to try it!  They sound disgusting but are kind of amazing! 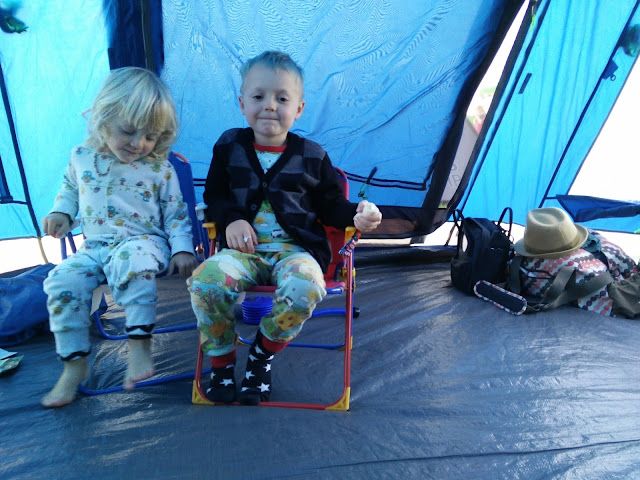 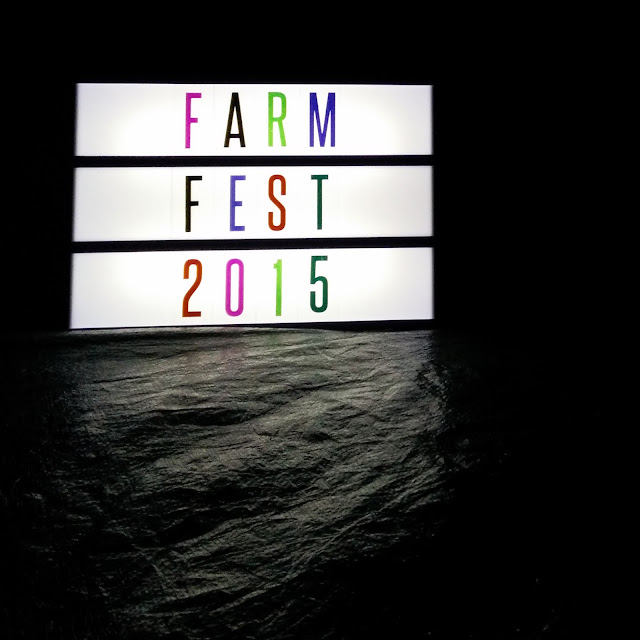 None of us slept well, Felix ended up with me and Pete with Ethan.  Felix crawled down the bottom of my sleeping bag at about 4am which was peculiar but somehow he slept his best down there!!

On Saturday morning we packed up our tent.  Whilst camping was still available for that night, it'd been such a tough night with Felix we weren't in rush to repeat it.  Poor Felix was really quite unwell on Saturday, not even up to running around!  We all enjoyed hot drinks from the coffee tent, coffee for us and hot choc for Ethan.  We needed it because Saturday was a bit colder and gray than Friday had been (Friday was a stunner!). 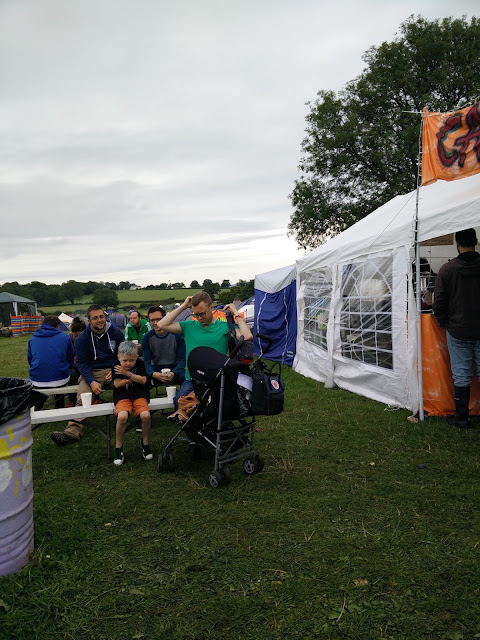 Once refreshed, we packed up our tent, packed the car and headed back to the festival for the day.  Again we enjoyed tasty food (French cuisine), good coffee, craft at the kids tent and music at the main stage.  Towards 4pm it was starting to rain and Felix was feeling really ill so we set off for home. 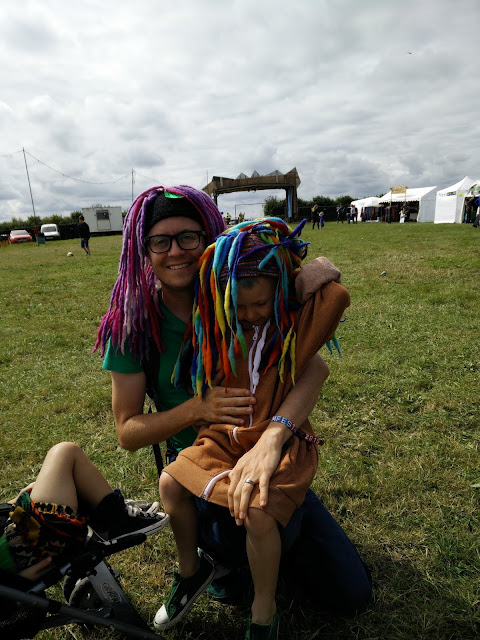 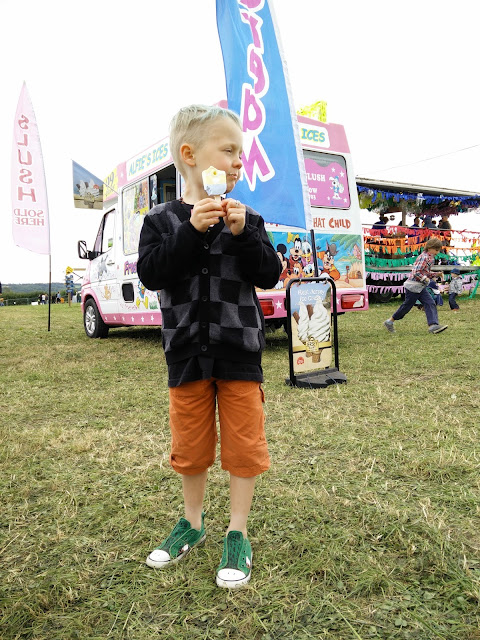 It was a shame for us that the weather on Saturday wasn't quite so nice and that Felix was so poorly.  Had he been well we might well have "carried on camping" ;-D.  Still, we're not put off.  It was a very friendly festival, great for us and the boys.   We would love to go again and I think that next year, when he's 3 and hopefully a little better at sleeping then we will be back!  With a pull along cart.... 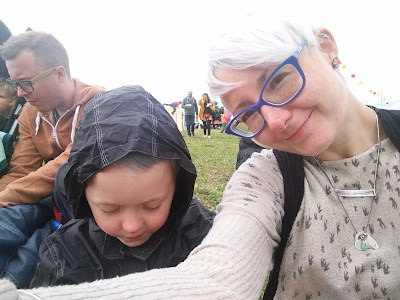