Did you know that one of the commonest search terms used to stumble across my blog is "boys tights"?  Well.. it is!! Now, let's just hope that it's a clean and family friendly search term, not something dodgy.  It could well be!! After all, I am a Mum of a boy and I've used the internet to search for tights for him that aren't covered in hearts etc.

Earlier this year I heard about a fantastic company called Slugs & Snails.  The owners, as parents of boys saw a gap in the market and filled it!! I suppose the idea of boys in tights may seem a little strange to some, but in some countries (lots of the Scandinavian ones for example) tights are the norm for both boys & girls. It's the most practical way to keep warm.

I've put Ethan in tights almost since birth (well, a few months after, he was born in July).  At first I bought him girls tights.  I found a pair by Trumpet that were black & white, dotty and stripy.  I loved those!! Once he was bigger, it was harder to find pairs that appeared unisex (believe me, I'm not saying boys can't wear pink, just that it's a step too far for me to put Ethan in a pair of pink sparkly heart covered tights) so I started googling and going on eBay.  I found a few pairs on eBay that were "boys" tights from Norway I think.  They were OK, but a bit cheap....

Eventually, I found Slugs & Snails.  Best of all, they are a much more local company (based in Ireland).  I was extremely excited when Kat from S&S offered to send us a pair for review - yay!!

We received our pair about a month ago and as soon as I got them out of the packet I could tell they were much better quality than tights Ethan has worn previously.  They are thick, the pattern goes all the way up and they have slip resistant soles - something that is essential with Ethan running around like a mad thing!

Ethan has been wearing them for a few weeks now and they are going strong after a few washes.  I've found them to be great for days hanging out at home, but equally fab under trousers or shorts.  They've really kept him cosy when he's been out on his bike (where his shorts or trousers often ruckle up).  We love them. 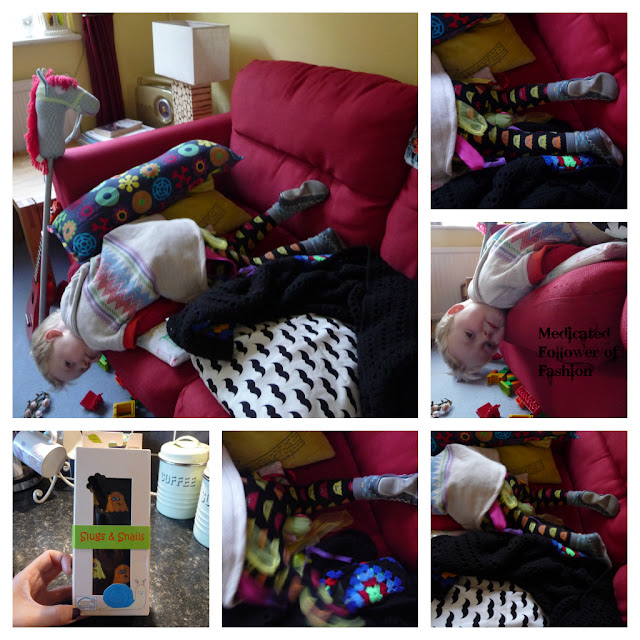 Slugs & Snails tights come in a variety of gorgeous patterns (the new range was launched recently featuring hedgehogs, owls, toadstools and more!) and retail from £12.99.   Good value I feel!

Now, if you have a trendy tot or child who's style you want to show off, why not link up today for Trendy Toddler Tuesday!  It's simple, use the linky below and follow the rules:

1) Please have the TTT badge either in your blog post or on your blog and link back to my blog.
2) Tweet me to let me know you've linked up and I can retweet for you!
3) Please try to visit the others who link up to share the love :)