Two nights down... but in that time, I've had less than one good nights sleep.  Woe.

How did last night go?  Well, it was made a lot harder by the fact that Ethan came home from school feeling very poorly.  The poor sole.  When I arrived to pick him up at the end of the school day he was beside himself, crying, sobbing and almost inconsolable.  He was complaining of a sore throat and a painful mouth.  I don't think it's the Hand, Foot & Mouth that Felix has had (though goodness knows because I've read that some children have it but don't display any of the traditional signs, they may just have a temperature, none of the rashes).  I think it's a bog standard cold/virus.  The trouble with my two is that as soon as they have a hint of illness their temperatures spike and they get very feverish. 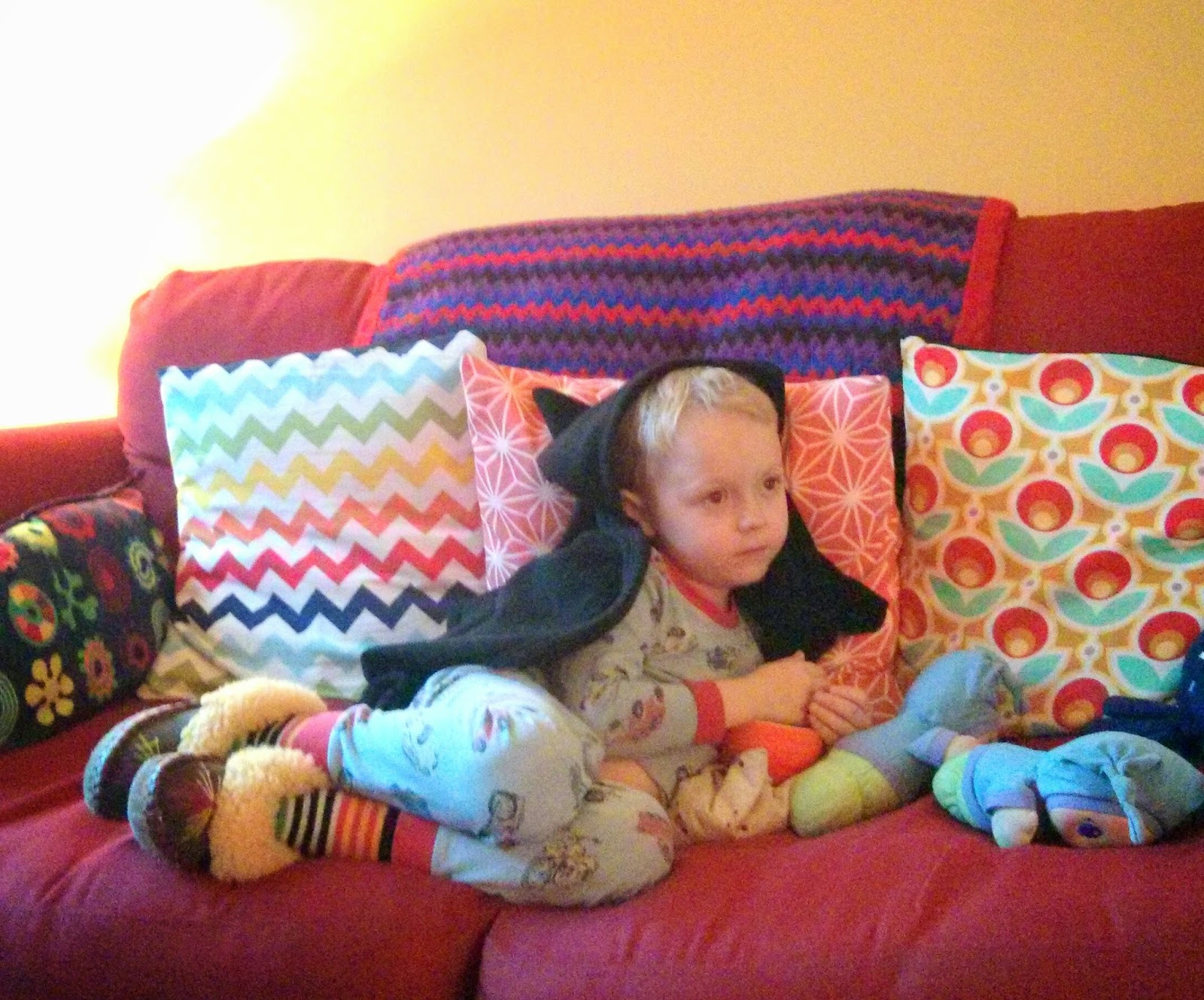 Ethan calmed down when I got him home and got some calpol into him and he went to bed happily enough.  However, he woke up at 3am asking if he could have a wheat bag warmed up because he was freezing cold (his temperature indicated otherwise, but you know what fevers are like!).  I then spent two hours with him getting him back to sleep.  In the end he settled in bed with us and dropped off around 5am.  I tried to get to sleep and was just feeling drowsy when Felix woke at 5:30 am.  Pete went into him and offered him some water and a little cuddle.  He then left his room..

..cue 15 minutes of crying and grumbling.... As I'd been awake for quite a while at this point and I didn't want Ethan being woken again I decided to go in to Felix and try to calm him down a little.  I picked him up, gave him some more water and then sat with him in his chair for a while, cuddling him.  Once I felt he was calm, after about 10 minutes, I placed him back in his cot and rubbed his back for a few minutes.  I then left the room.  Unsurprisingly he kicked up a fuss but it wasn't like before and was really more of a grumble.

He carried on intermittently grumbling and chatting to himself until around 7am.  We were all starting to get drowsy again and on the verge of dropping off when Pete's alarm went off.. as it's Saturday and none of us work weekends there was no need for us to be woken up at 7am so this was rather unfortunate.  We think he put it on by mistake last night.. an autopilot thing!  Felix heard the alarm and of course, he associates it with "time to get up" so that was that really.  Time to start the day.  I'd been awake since 3am again!

Pete has taken Felix out for the day which is a blessing.  Ethan obviously isn't feeling up to doing anything, and needs to rest at home.  I'm looking after him.  It's quite nice really.  Obviously it's not the ideal way to spend time with your child, I don't like having ill children but I do enjoy spending time one on one with Ethan, especially since he started school.  We've been snuggling up on the sofa, eating home made rocky road (I had the ingredients in the cupboard and it's so easy to make!) and we've watched Elf. 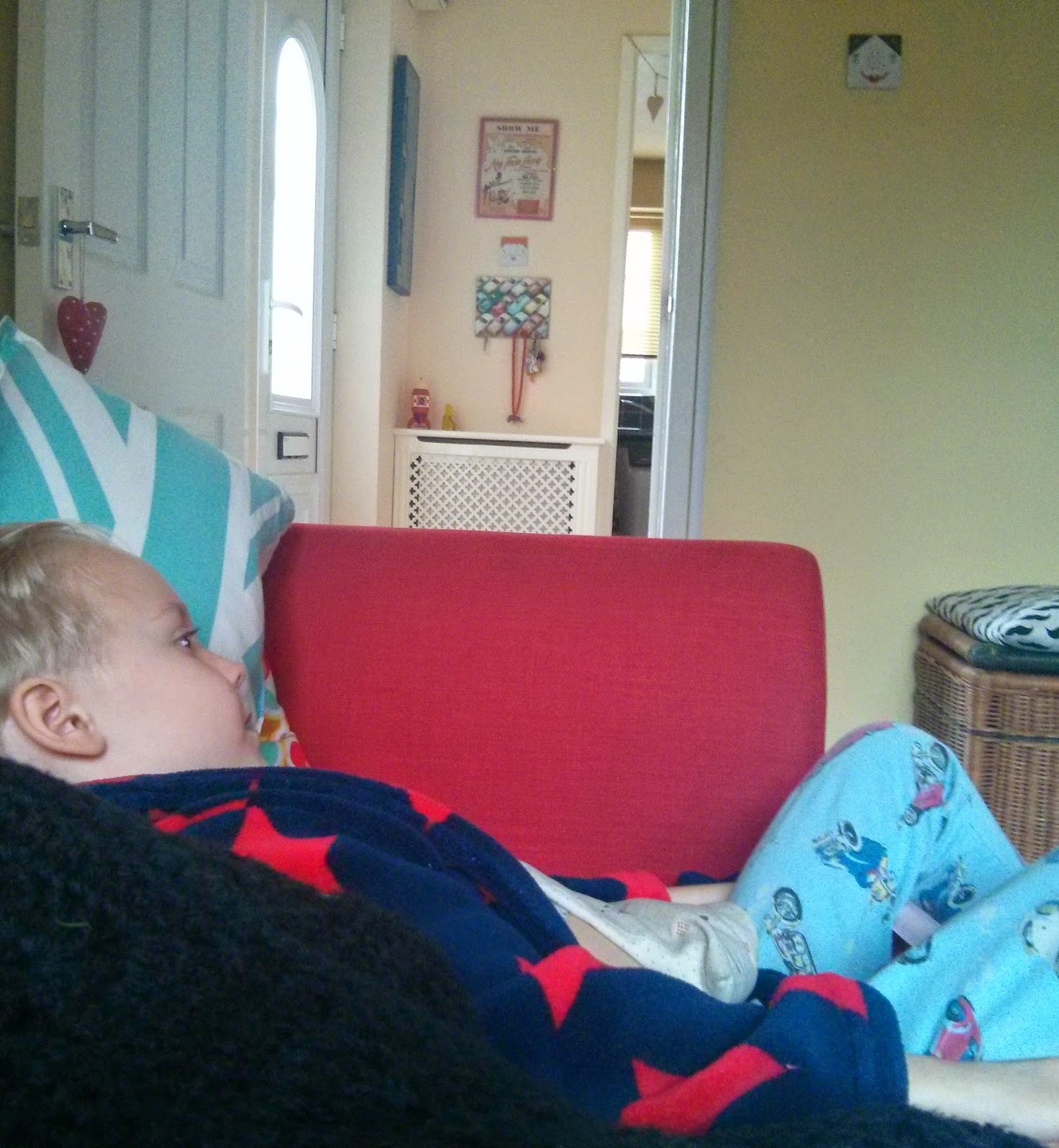 Let's see what tonight brings!!  I'm hoping Ethan is well enough to sleep through which will hopefully mean I don't get tag teamed by the monkeys and get a bit more than 3 or 4 hours sleep.

Anyone else out there going through this just now?
Posted by Unknown at Saturday, November 08, 2014