Funky Kid Friday & why I suck at blogging right now.

I love this linky.  It's like an adopted child.  It started as Trendy Toddler Tuesday when I took it over from Maria of Very Busy Mama fame.  I moved it to a Thursday and some point and it became Trendy Toddler Thursday.  Then I decided that as Ethan was getting older, he was no longer a toddler so I renamed it Trendy Thursday..  A few months ago I decided that Friday was a better day for me to host the linky so I moved it and renamed it Funky Kid Friday.  Which I like actually :-)  Anyway, since this linky started all that time ago, blogging has come on in leaps and bounds.  Almost everyone seems to be a blogger these days!! New linkys start up all the time and there are now heaps of kids fashion linkys out there - back in the day Trendy Toddler Tuesday was pretty much the only kids only style linky!!

It's always been a relatively small linky.  I think the most I've ever seen linked up to it would be about 10 people.  Number have been dwindling though.  I think that at the moment a lot of that is down to me.  I'm happy to host a linky but more work goes into it that you'd think.  Obviously there's the most important part, you've got to get a post written and live in a timely fashion.  You've got to embed the linky code so people have somewhere to link there post to.  That's the basics though.  Ideally you want to be tweeting people a day or two before linky day to remind them.  Then again on the day.  It helps also if you retweet their links once they've linked up and you really have to make a point to visit all of the linked up blog posts and comment.. because that's the point!

I know I've sucked big time at all of the above lately.  There have been a few occasions where I've not managed a post at all.  Many times when I don't even get around to visiting the blog posts that have been linked.  How awful is that?  It's no wonder people aren't bothering to link!  I feel awful about it.  Because I love this linky.. and I feel it's dying a death which is mostly my fault!

I won't lie.  I've been toying with packing it in.  Not blogging all together, but the linky.   After all, if no one's linking, what's the point?  But there's part of me that just can't give it up.  Not yet.

So, why am I finding it so hard?  It's a good question.  When I just had Ethan I used to find it relatively easy to find time to blog.  Once he was over a year old he slept well, most nights he was asleep by 7/7:30pm and he'd sleep until 6:30-7am.  Excepting the odd disturbed nights from teething or illness, he was pretty reliable sleep wise.  I knew that if I risked staying up until midnight or later to do some blog work that as long as I got to bed by 1am I'd more than likely still get 6+ hours sleep.  Just fine.  I didn't blog in the daytime with Ethan, he would only nap in his buggy and only in a cafe - funny child!  If I brought the buggy back home with him asleep in it he'd wake straight up!! So I used to walk around until he fell asleep and then sit in a cafe with a coffee and my book.. and he'd usually sleep for an hour.  Maybe two.  Total chill out time.  This again meant that when the evenings and nights came around I was ready to do some "work".   One child and two parents meant a fairly straightforward bedtime routine.  We'd take it in turns.  One of us would stay downstairs to cook our evening meal, the other would bath with Ethan, read to him and settle him in bed.  Usually we'd be eating our meal downstairs by 7:30pm and by 8pm I could get the laptop out.  When he was 3 Ethan started at preschool giving me time in the day to work on my blog.  Which was just as well because I fell pregnant with Felix and was totally done in by 7pm!!

Fast Forward to now.  Felix has been a whirlwind since the moment he got here.  He's not one to hang around or do things without fuss.  I should have known after giving birth to him less than 5 minutes after the midwife arrived at our house!! He was destined to be a pickle!! The midwife remarked on his strength when he was born.  He got a 10 on his APGAR which she said was rare in itself let alone after a (pretty much) unassisted home birth.  At three days old he rolled over by himself.  He walked at 10 months.  He's been noisy, vocal and (appears to us) very intelligent from the get go.  He's also a huge pain in the butt.  He's always moving.  Even asleep he moves constantly, even talking and crying in his sleep.  He doesn't sleep through the night.  At nearly 23 months old he's never slept through properly.  He will wake at least once and often several times.  He still has milk in the night.  He won't co sleep.  If we bring him in with us he stands up, opens the curtains, pulls my eyes open and shouts "Come on Muma, get up, stand up Muma, downstairs!".  He climbs on anything and everything.  I cannot let my eyes off him.  If he naps in the day time it might be as little as 10 minutes.  To be fair to him, it is often longer but very often only 45 minutes so, by the time I've got a few little jobs out the way, it's not long enough to get the laptop out and work!

The evening routines are solid but take MUCH longer.  Now one of us bathes with Felix and puts him to bed whilst the other stays downstairs with Ethan to do his reading and spellings.  Then the one who's put Felix to bed comes down to start cooking supper.  The other goes up with Ethan to put him to bed.  Once all of that is done, we usually sit down to eat at 8 or 8:30pm.  It very often is closer to 9pm and on a few occasions has even been 10pm!!  Once we've eaten, cleared up a bit and maybe had a chance to chat, catch up with each other, it's late and the last thing I want to do is work on the blog!!

On top of blog work I have other things to do these days that I didn't when I just had Ethan.  Ethan is at school now so there are things that go along with that, making sure uniform is ready, checking school emails, paperwork etc.  I have two massive bin bags of clothing and shoes to list on eBay that I never seem to get around to - as we're not planning a third I must sell the clothes Felix grows out of!!  Then there's other things, like the 2014 family photobook I've been trying to get around to making for ages.  Or emails that need replying too.. or craft projects I really want to work on.. or a stack of Molly Makes magazines that I've subscribed to since November but haven't yet read any of... or the 5 books I've started and not finished.  If I do start work on the blog I end up staying up until 1 or 2 am and then Felix wakes during the night and gets up for the day at 5:30am and I've only got 3 or 4 hours sleep... not enough!

Another thing to note about Felix.  He is ill.  Almost all of the time.  It's become a bit of a running joke with friends and family.  I'd noticed that he was often ill but became more acutely aware of it when my sister in law was diagnosed with cancer last year.  Due to her chemo treatment we had to be very careful about coming into contact with her if one of us or the kids was ill.  We would normally see her once a week at the weekend but that became very infrequent because Felix is ill so often.  I've started keeping track and in the last 10 months or so the longest stretch we've had between his illnesses is 8 days.  In the last two weeks (the school holidays) he has had a cold which lasted a week and a D&V bug which started on Tuesday and is still ongoing.

There is just SO much to do... and the fact is that things like Instagram are easier for me just now.  It's quicker, I get so much more interaction..

I'm not going to give up on Funky Kid yet.  I love this blog as I've said, and once Felix starts at preschool I really want to work on it properly, make more of a "job" out of it.  Maybe even make a living from it!! For that reason I don't want to let it go, I've got to keep it ticking over.

I'm sorry for this huge essay!! I just wanted to get some thoughts out, explain a few things.  To those of you who have stuck with me and the linky, thank you, thank you from the bottom of my heart.  I appreciate it SO much.  I really am going to make more of an effort to make it worth your while for linking up.  I do love seeing you all link and all your adorable children!

Here's a few pics of mine from the last few days.  I hope a few of you will link up and show off your funky kids! 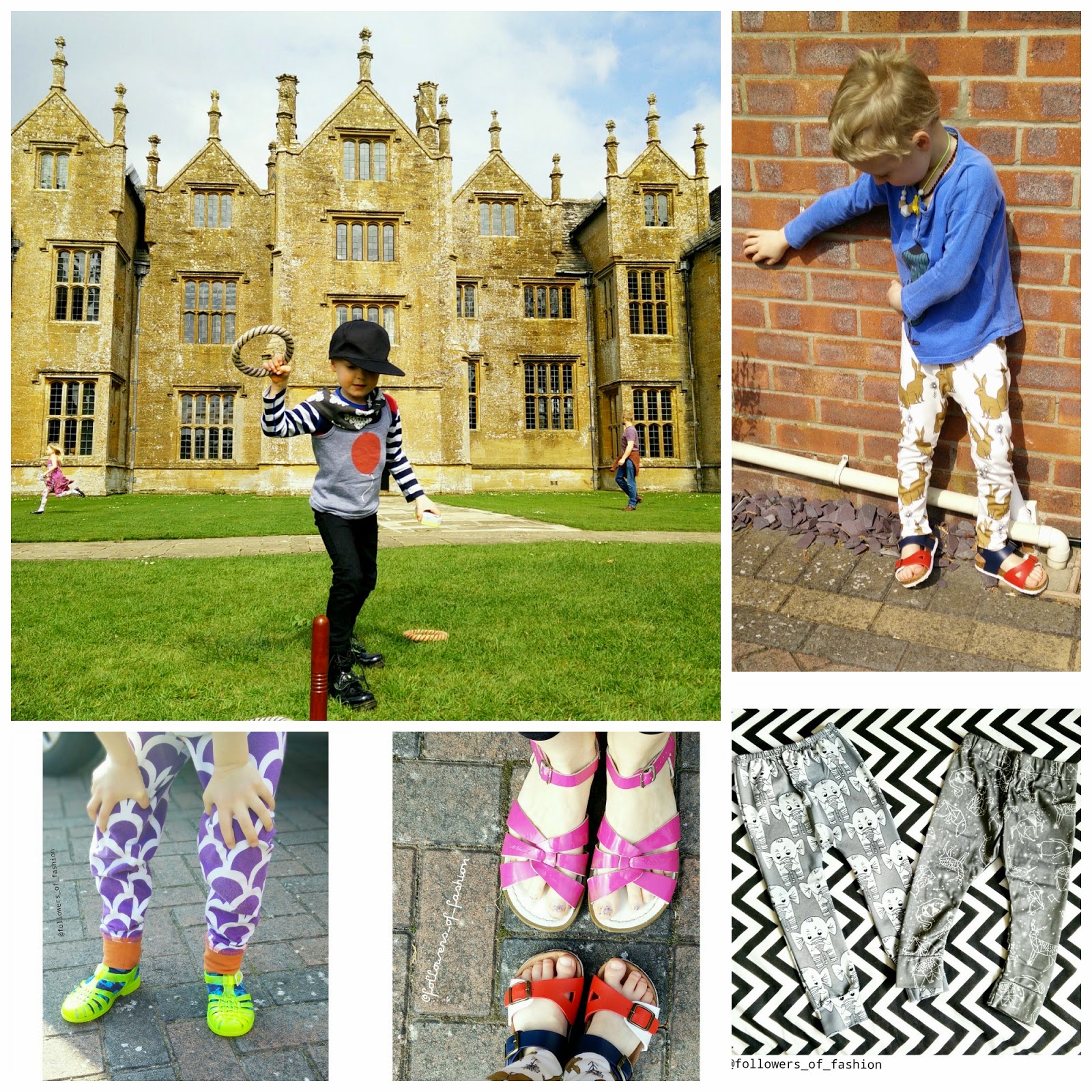 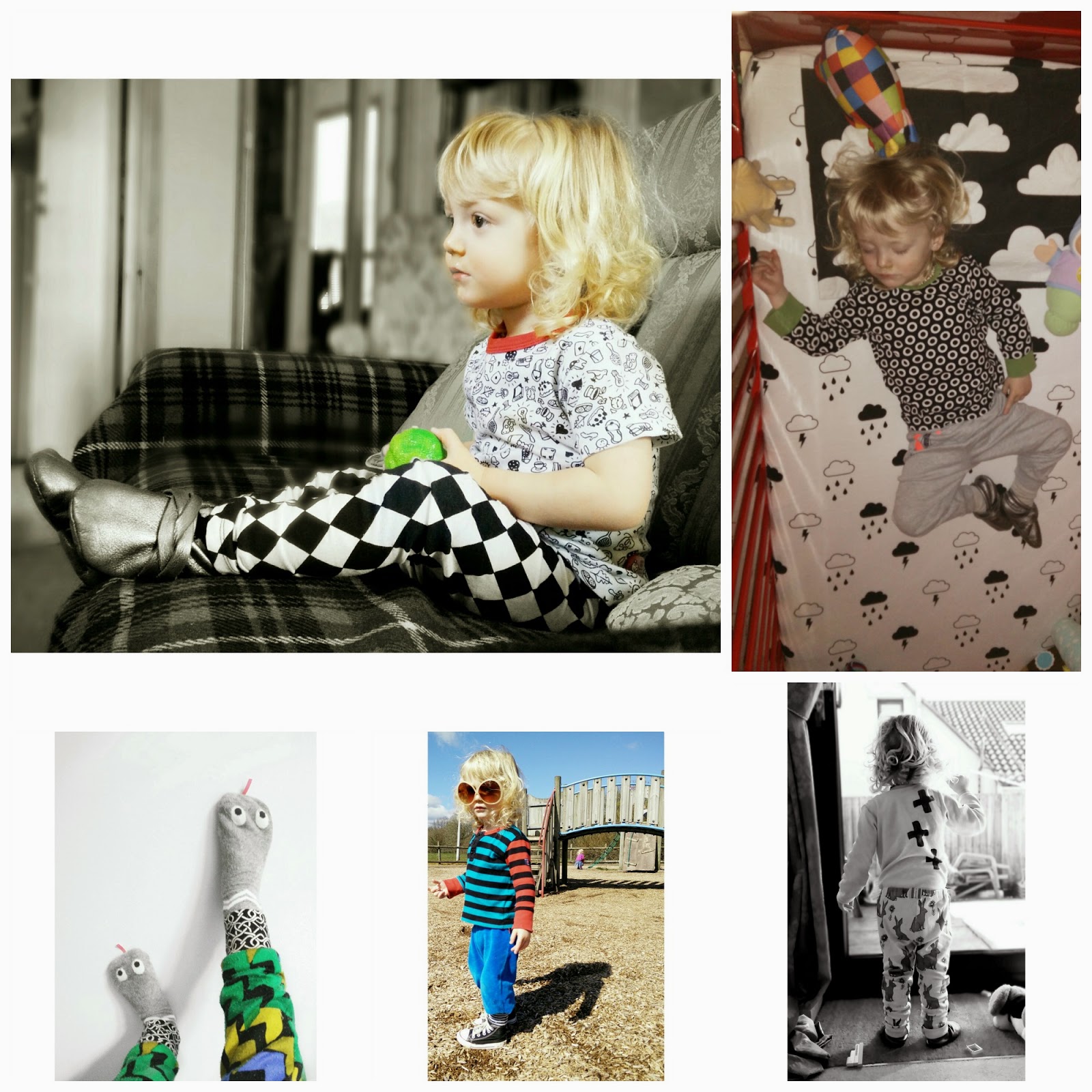 Scandi Cross vest - made by me
Rabbit leggings - as above

Love to you all!