Earlier this year, the supermarket in the centre of our town closed down.  When this happened, speculation was rife was to what would take it's place.  A large unit like that, the costs would be high, it'd have to be something similar.  I was quietly hopeful, like some others, that we might get a Waitrose (hehe) but no.  Eventually the rumor mill was full of "It's going to be a B&M store".  I was most dismayed.  In the late Spring this was proven to be true and from then it was full steam ahead at the empty store, a whole heap of orange and blue started to appear.

I wouldn't say I planned to boycott the store but I was rather hopeful I'd never become a regular customer.  You can tell where this is going, can't you.... Well.  For a couple of months I honestly didn't go in.  Then a friend went in and was impressed so I was intrigued.  I really needed to buy a kids birthday present for a birthday one afternoon at short notice and very few places were open, my son wanted to go in and look there for the gift.  I told myself, it's OK.  We're only going in to look for one present.  It's not like I WANT to go in.  From then on it's been a slippery slope.  Don't get me wrong, I still very much prefer to shop elsewhere if I can, but they do stock some tempting items.  American sweets for one thing.  That's probably most of what I buy in there actually.  They stock a gorgeous stout that I can't find anywhere else.  They've been great for Paw Patrol crap toys that Felix lusts after.  I do stick to local small retailers but I don't make a point of avoiding it anymore.  Which is just as well and really brings me around to the point of this blog post.

This week it turned really bloody freezing.  Felix and I were in town, he'd ridden in on his bike.  We were due to go on to his gymnastics class but despite my best efforts to layer him up before leaving the house to keep him warm, he was crying with the cold.  There aren't really any kids clothing shops in town save from rifling through the charity rails.  Which is fine unless you are dragging said child with you, already moaning from cold.  I knew that B&M had hats, scarves, gloves and Christmas jumpers.  I knew that the silliness of a Christmas jumper might tempt Felix to put it on and keep him a little warmer.  In the end we managed to get a rather cute penguin jumper, a neck warmer and a very fetching hat which looks like a Christmas pudding.  This hat has been an absolute Godsend.  Felix doesn't really tolerate hats at all but since getting this one he constantly wants his "pudding hat" on.  And the amount of compliments and attention he attracts in it!  So cute. 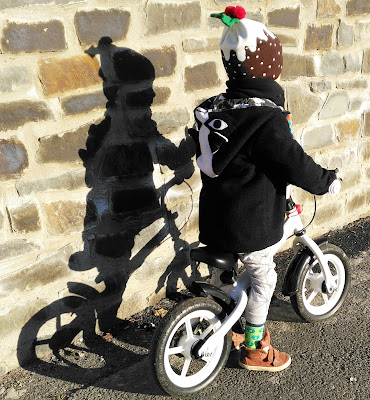 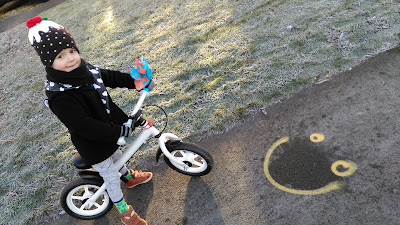 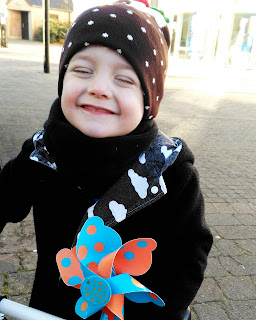 In an ideal world I would buy only second hand or very ecological, ethical organic clothing.. but unfortunately this is the real world and for me, I'm afraid it does mean sometimes slightly deviating against my preferences.  But at least I have a happy warm child... and he does look damn cute in that hat!

Linking up with Hannah for Funky Kid Friday today.
Posted by Unknown at Friday, December 02, 2016