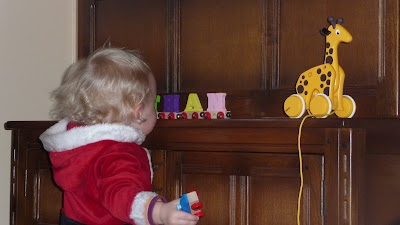 The great big toy debate.. do you know to what I refer? It's the wood V plastic debate basically (or taste V tack as I see it quite often!).
I think many mums have this idea when they are pregnant, that they will only have a selected few tasteful wooden toys in their house for their child. The reality is that even before you've given birth people start dumping bits of all singing all dancing VTack on you. What do you mean you don't want a plastic singing bus? How could you not want that in your house? You mean you don't want to trip over it in the night making it sing "let's go to the zoo, la la la la laaaaaaaa" very VERY LOUDLY waking up a dog 10 miles away.. Let alone your baby...
I have been very strict with the amount of plastic tacky toys Ethan has and even we have a few! It's not at all easy. I try not to buy Ethan plasticy stuff if I can avoid it. We've done pretty well. We have the bus I mentioned above and all of his bath toys are plastic (though they are limited to the bathroom ;-D ). He has a lot of my old toys from the 80s which are plastic but I don't mind them so much because they aren't as tacky somehow and they are being re-used (I love the fact he plays with my old toys!).
In my experience, and in the experience of most the parents I know, for a long time, all children are really interested in (apart from their parents attention and love) are cardboard boxes, wooden spoons, saucepans and your car keys. 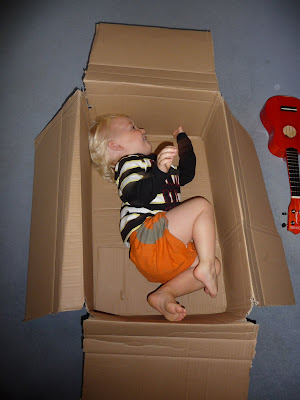 I honestly don't think children need all the toys the adverts would have you (and them most importantly!) believe. Ethan doesn't have that many toys compared to some and most of them sit there unplayed with most of the time. He loves his cars, his gloworm and drawing. As long as he's got access to them he's happy.
If you want any more evidence that the plastic and singing stuff isn't so great, just look at these two videos! The first depicts a toy given to Ethan by my aunt. She described it as a "tourettes toy". It was given as a joke, obviously, because that's the kind of family we are... The other video shows a song sung by "My Pal Scout" who Ethan was given by his God father. My apologies for the quality of the audio.. but hopefully you can hear the most important bits!
SWEARS!!! OH NOES!!! Hopefully these videos will be taken in the tone they are meant to be taken in, and don't offend any of you!
Obviously I'm being light-hearted about this.. What I'm saying is that if you do want to avoid too much plastic, you can. But it's not easy!
Posted by Unknown at Monday, November 21, 2011