A slight deviation from the norm for today's Trendy Tuesday.  I want to write about something that drives me MAD... Colour and gender.

Why is it so many people believe that certain colours can only be worn by boys, or by girls?  I mean seriously, what exactly does a colour have to do with gender, or even sexual orientation   Now.. I know this is deep seated issue, for years there have been "boys colours" and "girls colours" (although which constitutes which has changed throughout the years!) but come on, lets just think about it for a moment.  In all honesty, do you think that dressing a girl in blue will make her a sword swinging train obsessed lesbian?  Do you think dressing a boy in a bit of pink is going to make him start wearing heels to do the food shopping in?  I really don't think that if you dress your child in a variety of colours it's going to have any bearing on their gender and sexuality.  No, if anything, you'll have a much more balanced child who gets to know their own mind. Children know nothing of this type of thinking, it's only when they get exposed to the warped views of society that they start to equate things like colour or types of toys with gender.

All the time I come across this type of thinking.  Photos on Instagram "Oh, my poor son has to wear my daughters pink bib.. I hope he doesn't mind wearing pink!".  On a buggy fan page on Facebook "I'm looking for new textiles for my buggy, anyone selling?  Boy colours like blue only please".  On eBay descriptions "I'm selling this cot bedding set because I had a girl last time.  I'm expecting a boy this time so I can't put him in a cot with pink bedding".

I've witnessed the beginnings of this with Ethan and it saddens me.  When I was pregnant with him, I had no idea if I was having a boy or a girl.  I bought clothes for the baby according to what I liked and thought looked nice, comfy, colourful and funky.  I bought clothing in an array of colours knowing I'd happily put a boy or a girl in them.  We painted "the baby's room" green because Pete and I like green.  Not because we thought we were having a boy (apparently green falls into the "boy" category).  People actually asked me when seeing it either in the flesh or in photos "will you re paint it pink if you end up having a girl?".  Errrr... no!!! We like green, we thought it was a bright happy colour to have on the walls of a child's bedroom so that's what we went for.

We had a red buggy.  Again, we bought that without knowing what we were having, just because we like red.  I have lost count of the times that people assumed the baby I was pushing in that buggy was a girl just because it was a red buggy .People would stop and say "what a lovely baby, she's gorgeous" and I'd obviously correct them, point out that he was a he, and they'd respond with "Oh, well, I assumed it was a girl due to the red buggy!".  Really?!

I've always continued in the same vein, I've continued to buy Ethan clothes and toys in a variety of colours.  I've never told him he couldn't have something because it was pink (I may have told him no because he doesn't need something, but that's another issue!!).  He spotted a pink toy push chair in a charity shop once and asked if he could have it.  I said yes - why not?  Once he asked if he could push his Gloworm in that push chair to Tesco.  He was dressed as a fairy at the time (he has everything in his dressing up box, Astronaut outfits to Princess dresses).  Again, I said yes.  Unfortunately, whilst on our way there, some young men pulled up in their car and shouted "GAY!" at him.  Ethan didn't know what they meant, I don't think he even noticed, but for goodness sake, he was 2 at the time!!!!

This is what I mean by society starting to make an impression on him.  Since starting preschool last September, I've noticed Ethan coming out with strange views.  Views that I would never have expressed or imposed upon him.  Only yesterday he told me "boys can't be beautiful, they can only be funny".  How sad that has made me.  I asked him where he heard that, he told me "at school".  I'm not sure whether from the teachers or other children.  I can't control this sort of thing.  From now on, he's going to be without me for many hours a week and I won't be able to control what he's exposed to.  I can only discuss things with him when he brings them up and hopefully give him the strength and understanding he needs to get through this life without becoming restricted in his thoughts by the rest of society.

It's a hard path to walk.  By encouraging this way of thinking in him, I'm exposing him to the possibility of bulling and mockery by peers.  What can I do though?  I don't want him thinking certain things are "only for boys" or "only for girls".  I want him to think that he and EVERYBODY else can do/wear/achieve what they want.

I'm not one of those parents who's trying to raise some kind of "gender neutral  child.  The idea of not telling your child what gender they are is not one I'm comfortable with.  But equally, if Ethan wants to put on a dress or choose a pair of pink shoes, I'll happily let him.

OK.  I'm sorry about that.  I just needed to have a rant.  I will now get on with the normal business of Trendy Tuesday.  Unsurprisingly, to go with my rant today, I'm going to share photos of Ethan in pink and colourful clothing.  Both recent and from a few years ago. 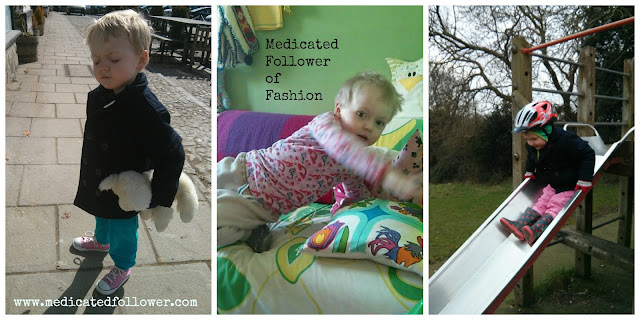 If you want to join in, please link up any blog posts about your children's fashion using the linky below.  The rules are simple:

1) Link back to my blog in your blog post and/or display the Trendy Tuesday badge (code available to the right).