How to get your child to sleep..

Sorry folks.  Were you hoping for an answer?  If you were, don't worry, we're in the same boat.  If you happen to know the answer, share it, please!!

Felix is now 2 years and 5 months old.  In all that time he has "slept through" a mere handful of times.  Never have we reached a stage where he has slept well consistently.  The best we have ever had is a couple of nights together where he might have slept from 8pm-6am.  That would be an amazing night.  Most nights are more like this:

So far, so good, right?  This is where the "fun" begins.  Some nights he might fall happily asleep by himself. Sometimes with his milk, sometimes just tucked up and left to his own devices.  But he is just as likely to kick up a fuss.  We tuck him in, give him a kiss, leave the room and then it starts:

"I want some water! Where's my water?"

I know he's more than likely after attention.  I don't go straight in.  Sometimes he'll go quiet.  If he's rampining up, I'll pop my head round the door and remind him where his water is.

All goes quiet for a while.  It might stay quiet for 10 minutes or so.  Then there will be a wail of:

"I want to do a weeeeee on the pottttttyyyyyyy!"

Felix is more than capable of taking his night nappy and clothes off and doing a wee on the potty but I also know that he is then likely to attempt to empty the potty down the loo.  That's a mess I could do without, especially on new carpets.  So, yet again, I'll find myself in his room.

Once the wee has been dealt with I'll tuck him in again.  This time I'll make sure my voice is very firm, tell him he HAS to stay in bed.  He needs to sleep.  We all need to sleep.  It's night time.  Everyone is sleeping (ha!) and Mummy & Daddy are extra happy when he stays in bed and sleeps.  Usually this works and he goes off to sleep.

Once we've eaten, we are, of course, worn out.  I rarely have the impetus to work on the blog at this stage (that's why you see so little from me!).  As we moved house recently, we spend these precious moments trying to put pictures up or choosing our potential bathroom suite!  Sometimes I do risk staying up late to work on blog work or magazine work.  Or even doing things in the house.  You can guarantee that the night I stay up until 1am Felix will wake at 2am.

Nights with Felix are varied.  At the moment he mostly wakes at 4am.  He'll want milk.  We've tried cutting milk out during the night before.  After 5 weeks of screaming every night we gave up.  If he has milk at the moment he'll likely want a wee shortly after.  This has been our issue most recently.  Because he's been potty trained during the day for a few months now he's very aware of when he needs to wee and understandably doesn't want to "wet" himself.  His nappy is just for when he's asleep.  He's no where near the stage of having that taken away because it's always soaking in the morning.   In fact, we often have to do a nappy change and potty visit during the nap.  Often, if he's woken at around 4am it can be very hard work to get him back to sleep.  Sometimes he just doesn't..  So our days often start very early.

I've heard just about all the advice out there.  I KNOW that if he had less milk he'd likely wee less at night and possibly sleep better.  It can be very hard to get him to fall asleep without milk at times though.  Milk is a source of comfort for him.  He's not attached to any of his toys.  He has never taken a dummy.  It's his milk bottle or having Mummy/Daddy near by.  That's it.  We know all about having a concrete predictable regular bedtime routine- we have one! Always have.  It's hard dealing with this kind of behavior if you are conically sleep deprived.  We are often so grumpy and fed up.  Both Pete and I have felt very low at times due to the lack of sleep/disturbed nights.  We have both said that the joy in life has gone.  What is there to look forward to?  We have no energy to do anything?!

Every now and then Felix will throw us a life line.  The odd sleep through.  Like last night.  Just when we were teetering on the edge he slept from 7:30pm-6:30pm.  Bloody amazing.   I feel on top of the world today.  Well.. Not quite that good.  I'm still missing a good few years worth of sleep, but I feel a darn sight better.  We all do.  Felix's mood is better when he's slept well.  He's a nicer child to be with and we are nicer parents.

Why can't he just do it more often?  Life would be SO much better! 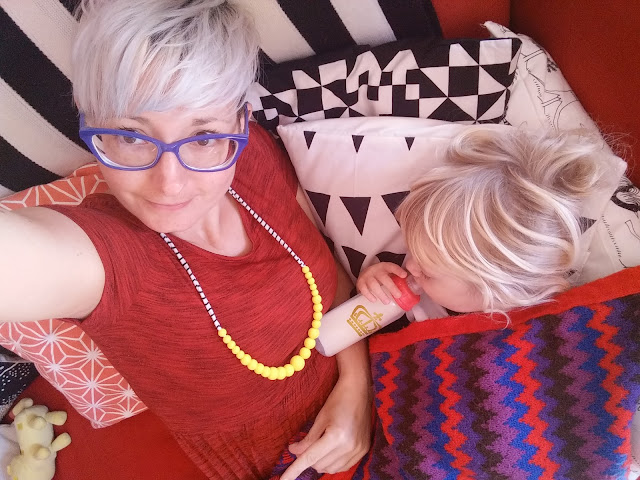 My friend sent me a link a Woman's Hour radio show from the other week that featured sleep tips from Carl-Johan Forssen Ehrlin, the author of the now famous book, The Rabbit Who Wants To Fall Asleep.  Well, it just so happens I bought that book back in August.  The first night I read it to Felix I was skeptical.  Would it work?  Well, do you know what?  It did.  That first night.  But it has never EVER worked again.  Bugger.

How does the book work?  It uses NLP (neural linguistic programming).  The types or words, the way they are put together and the tone of voice you use.  It does work.  It's a little like hypnotism.  It has been successful for a lot of people.  The technique is sound.  I have found that if I talk to Felix using this type of language/tone then it really helps him relax and "come down" from a real tantrum.  I don't think it was a waste of money, my purchase of this book.  I just don't think it's a magical answer for us.

I know I'm not the only one with a bad sleeper.  Do your little ones sleep well?  Have you any tips?  Something I may not have tried?  Despite sleeping well last night I'm too experienced in "Felix" to think it'll happen again soon!  Perhaps I should start a sleep deprived support group.  Except I haven't the energy...