Ahhhhhhh, Trendy Toddler Tuesday, how I love you!  Enabling me to showcase Ethan's clothes each week... bliss!!! The terrible thing is that because Ethan has a larger wardrobe of outfits than hubby and I put together (OK.. well, maybe not quite, I do have A LOT as well..) it's usually quite easy for me to show off a different outfit each week!

This week Ethan is stylin' something you won't see very often on him - at least not at the moment (when he has more say in what he wears, this may change!) - a branded character top.

In the last month or so Ethan has really got into the Toy Story films.  When he managed to do his first poop in the potty a few weeks ago I got him a Slinky Dog as a prize.  Now, if he or I spot anything with Toy Story on it when we're shopping, our eyes are drawn to it.  I'm not one for having too many character things though.  It can be a bit samey and boring.  But.. when you see your child's eyes light up in glee because they're sporting their favourite character on their top, you just can't help yourself!

I was in a charity shop a few weeks ago when I spotted a Toy Story top (originally George at Asda) for 79p.  Bargain!  It was in excellent condition and I knew it would make a brilliant "poo bag prize" for Ethan (can't carry on giving out £16 slinky dogs for every poo!!).  I bought it and after a week or so Ethan earned enough poo stickers on his chart and chose it as a prize.  So, let me introduce the very proud little man! 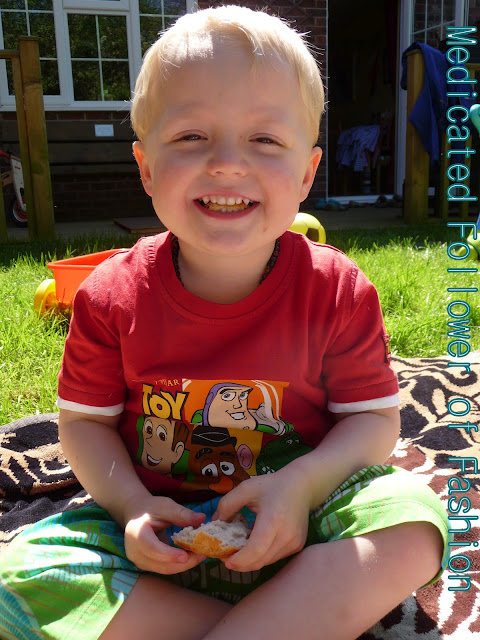 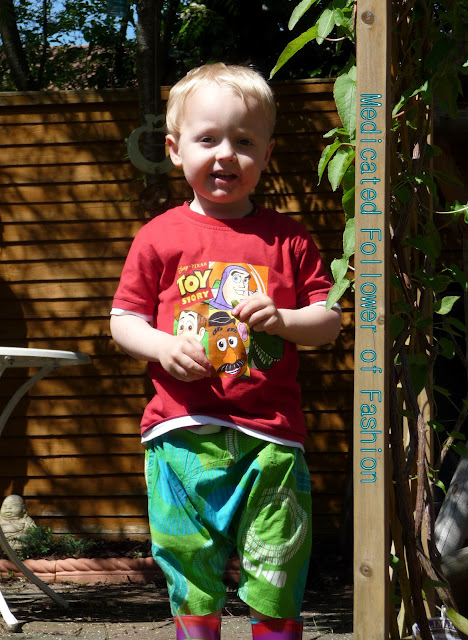 I love the Katvig shorts.  This was their first outing.  I featured them before in a TTT.  Ethan enjoyed wearing them, they look very unusual.  Love them!! A shout out to Bebaboo.com of course, where I got them.. still love shopping there for him!

Don't forget to head over to Maria's blog to see the other Trendies!
Posted by Unknown at Tuesday, May 22, 2012