As Ethan gets older, I am more and more concious of helping him learn as well as play.  After all, he will be in "proper school" in less than 8 months (OH MY GOD! SCARY!) and whilst I know that they will be teaching the basics when he arrives there, it'd be nice to think it won't be a shock to the system.

I'm not that great at this side of parenting.  Ask me to feed, clothe and organise him, I'm fine and dandy.  Ask me to do some imaginative play or teaching and I get a bit itchy.  I feel I freeze up when "playing".  I'm starting to get a bit more used to the teaching thing.  I'm not a huge fan of "sit down and we'll do a few hours of learning" - I don't think I'd be any good at home schooling.  However, something that seems like play but is secretly helping you learn?  I like things like that!

A couple of months ago we were sent a Hot Dots card and pen set.  These are self checking flash cards for the age of technology.  No longer do you just have to flash a card at your child and ask them what is on there - you can use a cool "pen" which will flash a green or red light (green for correct and red for incorrect) and an encouraging phrase or sound.  We have some traditional flash cards but these are far more fun. 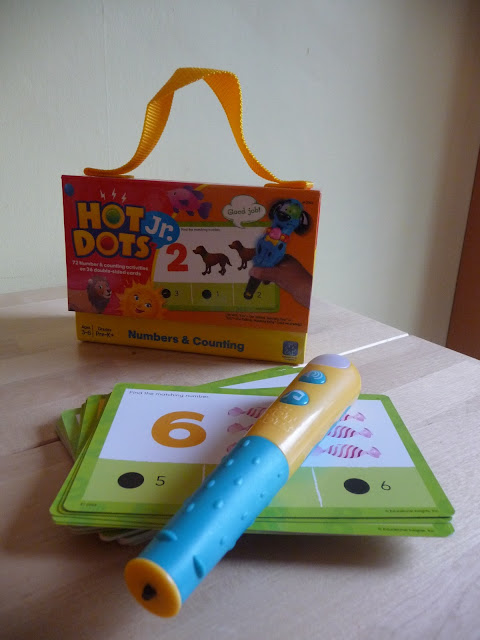 Ethan was entranced by the pen straight away.  Anything that flashes lights and talks is fantastic for a 3 year old.  We were sent "Numbers & Counting" which is just up Ethan's street - he loves numbers.  Other sets available include The Alphabet, Shapes, Colours and more.  Ethan found the concept easy to understand.  The only issue is that sometimes he gets distracted by wanting to make the pen flash red so he deliberately presses the pen on the wrong answer.  Silly thing!! 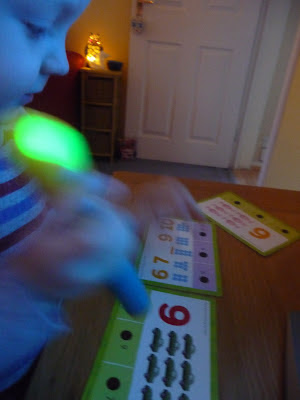 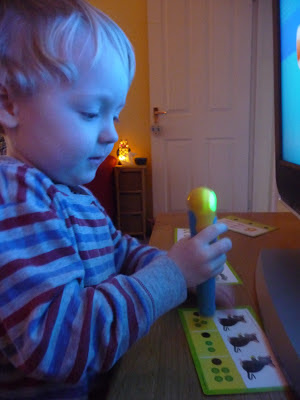 The positives out way the negatives with this set - it's very portable, will provide at least 20 minutes of entertainment and due to the cards being double sided, it feels like there are lots of different cards to look at. Some of the cards have "easier" questions that others, so you can build up towards harder ones.  The only real negative is that the pen doesn't have an off switch so if you leave it with batteries in, it can set itself off in the box when knocked.  Not really the end of the world though.

I've included a video to show the set in action.  We're pleased with this set and I'd be happy to recommend it to friends. The cards retail around £8 and the pens (sold separately but one pen will work with all cards) from £5-10.

**We were sent this set free of charge for the purpose of review but all views expressed are my own and no compensation was received**
Posted by Unknown at Thursday, January 24, 2013