At nearly 39 weeks pregnant, nesting has been in full flow for a LONG while.  If I can scrub it, de-clutter it, clean it or wash it, I probably have.  Heavens, only this morning I put the TV remote tidy in the washing machine (it is a material one, I'm not completely mad!).  When I was asked if I would like to review a Karcher Steam Cleaner, what did you think I said?  Yes!  A loud resounding yes!

A steam cleaner really appeals to the nesting pregnant woman in me.  I'm a tidy person at the best of times.  I don't like to go OTT with the cleaning, I try only to vac once a week, clean the bathroom once a week and dust once or twice a month.  I do love to tidy and clean as I go though, that's one of my mottos and it's something that keeps your house tidy and in good nick I feel.  Something I have always struggled with is laminate flooring.  Like many houses today, we have several rooms with laminate floors.  I've never touched them with a mop for fear of saturating and ruining them with water.  What I've ended up doing is always mopping things up straight away and then every few months, getting down on my hands and knees with a damp cloth, scrubbing them and then drying them off with a dry cloth.  It takes ages and hurts my knees no end.  Having a steam cleaner means an end to this - an exciting prospect!

Despite the nesting urge, I've been putting off  using the steam cleaner.  It's always a bit scary getting something like that out.  What if I burn myself with steam?  What if I somehow flood the kitchen?  I decided to bite the bullet this week though.  So, yesterday, with a couple of hours to myself, I unpackaged the cleaner, read how to put it together and decided to start off with the floors and see what I felt like trying after that!

Putting the cleaner together was pretty straight forward.  There are some handy illustrations showing you which bits go where. The handbook tells you quite clearly what you should and shouldn't do.  There are several attachments for different jobs.  There's the actual steam hose "with gun", a hand tool , detail nozzle and small round brush.  There are also terry towel covers for the hand tool and detail nozzle.  Once I'd figured out what went where and what did what, I filled up with tank with water from the tap, plugged it in and waited the 6 minutes it takes to heat up to the required level. 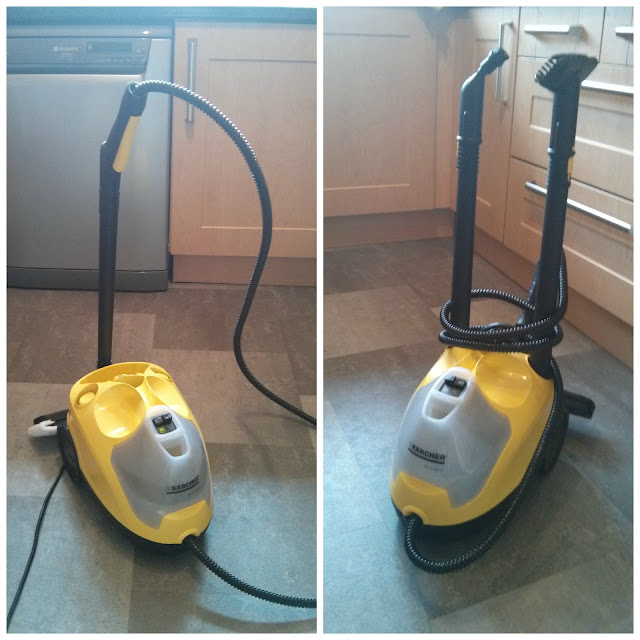 I don't have large laminated areas so cleaning my kitchen floor and entrance area was really quick.  Stupidly quick really after how long it's taken me cleaning them by hand.  I couldn't believe how quick and easy it was.  You could see dirt on the terry towel covering.  As I've mentioned, we're quite clean and tidy, but it was great to see that dirt was being picked up.

I needn't  have worried about using a steam cleaner on laminate flooring and getting it too wet.  As long as you don't leave the steam head in the same area for ages whilst pressing on the steam "trigger" you won't get pools of water.  I was also impressed by how quickly the floor was dry though I must admit I kept a dry cloth on hand just to buff over as I went.  Paranoid!!

After the floors, I decided to try the small round brush attachment on the cleaner and give the hob a clean.  Now, my hob is pretty clean, it gets wiped down once or twice a day, but there were some stains on there that I hadn't been able to budge.  The Karcher steam cleaner got rid of them in seconds!!

After that, I moved on to the covers on the cooker hood/vent.  These get really greasy.  I gave them a rub down with some washing liquid and a sponge first to start to eat into the grease but finished the job with the steam cleaner and it was fab seeing the grease come off!!

I really enjoyed using this steam cleaner.  It was quick, easy and quite good fun!  I'm going to give the bathroom a going over next - there's some limescale build up on the shower head and taps I'd like to get rid of.  The bathroom is another room with a laminate floor so I'll be doing that as well!

Something I love about this steam cleaner is that you don't need to use anything but water in it.  So, no chemicals, and it gets rid of:

This is great for me and my family - we are due a new baby any day, so any way I can clean without chemicals and ensure my house is clean is fantastic.  I am allergic to pollen and mould/fungus so this is also fab for me.  My husband and Ethan also suffer with sensitive skin and allergies, so again, this is great for them!

This steam cleaner retails at around £220 which isn't cheap, but I think that it would quickly pay for itself.  Just the fact that I no longer have to get down and hurt my knees to clean floors is amazing.  There are more jobs than I care to think of that I can get done with this cleaner.  It's a gadget that appeals to hubby as well.  In fact, cleaning the oven has always been his "once or twice a year" job so I know he's itching to give it a go!  It'll be nice to be able to do it without stinky chemicals which are dangerous if touched/swallowed etc..

Would I recommend it?  Yes, definitely!  Go get one today!

**This is not a sponsored post, all views expressed are my own.  We were provided with a steam cleaner for the purpose of review but no compensation was received**
Posted by Unknown at Thursday, May 09, 2013

Email ThisBlogThis!Share to TwitterShare to FacebookShare to Pinterest
Labels: Reviews