We were offered the chance to review a new snack from the Walkers range recently - Hoops & Crosses!

I'm not a huge fan of crisps and the like for young children to snack on.  Even though Ethan is 4 in two months time, I still only give him packets of Goodies wheat snacks.  He's had the odd packet of Quavers as well, but generally speaking, it's the "made for little children" stuff.  It's probably over the top, but I figure he's got enough time to build up crisp eating habits!! Anyway, Goodies "crisps" aren't cheap, so when I was contacted to see if we'd like to review Walkers Hoops & Crosses which are made from wholegrains, I thought "why not?".

Our packet for review arrived this weekend just gone.  They were presented in some very cute packaging with an info booklet and a cute toy monkey which Ethan has taken to (he think it looks like Curious George!).

We were popping out into town for the afternoon so I'd made Ethan a lunch box.  I popped the Hoops & Crosses in there.  Ethan was super excited to try them - as I said, he only really gets Goodies snacks, so this was quite a big deal for him!

I must admit I think he was a bit taken aback by the flavour - we were sent Roast Beef.  He's never had a flavour like that before.  He made a surprised face with the first taste, but he went back for more and with no complaint whatsoever, the packet was soon demolished!!  I asked him what he thought.  "Yummy" he told me.  That's about all you'll get from him on the subject, but I think that's good enough!  I managed to pinch one when he wasn't looking and I thought they were fine.  Crunchy and the flavour was good, not too strong, not too weak. 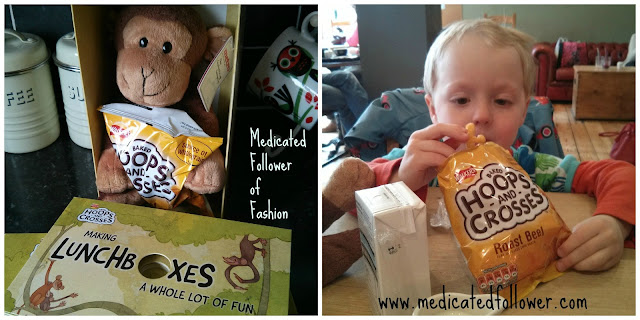 I'd be happy to buy them for Ethan and put them in his lunch boxes.  Especially if they work out cheaper than the Goodies snacks!

A few facts for you if you fancy trying them out:

- Each bag has 85 calories
- Hoops and Crosses are made from wholegrains with no artificial colours or preservatives
- They come in three flavours; prawn cocktail, roast beef and salt & vinegar and all are suitable for vegetarians

Email ThisBlogThis!Share to TwitterShare to FacebookShare to Pinterest
Labels: Reviews