Felix has been "having" solids for a few weeks now.  I started introducing them a few days short of his 6 month birthday.  He's 7 and a half months now, so I suppose it's been something like 7/8 weeks.  And.. well, I'm just not sure how it's going.

He loves playing with his food.  He's mostly happy to go in his high chair, he enjoys being at the table with us.  But how much does he actually eat?  Not a huge amount.  Now, I know things are a bit different with BLW when compared to weaning using puréed and mashed food.  I know that very often babies given mashed food often eat a larger volume when compared to BL babies... yet, I'm still paranoid.  It seems to be in the job description as a parent - you worry and doubt! 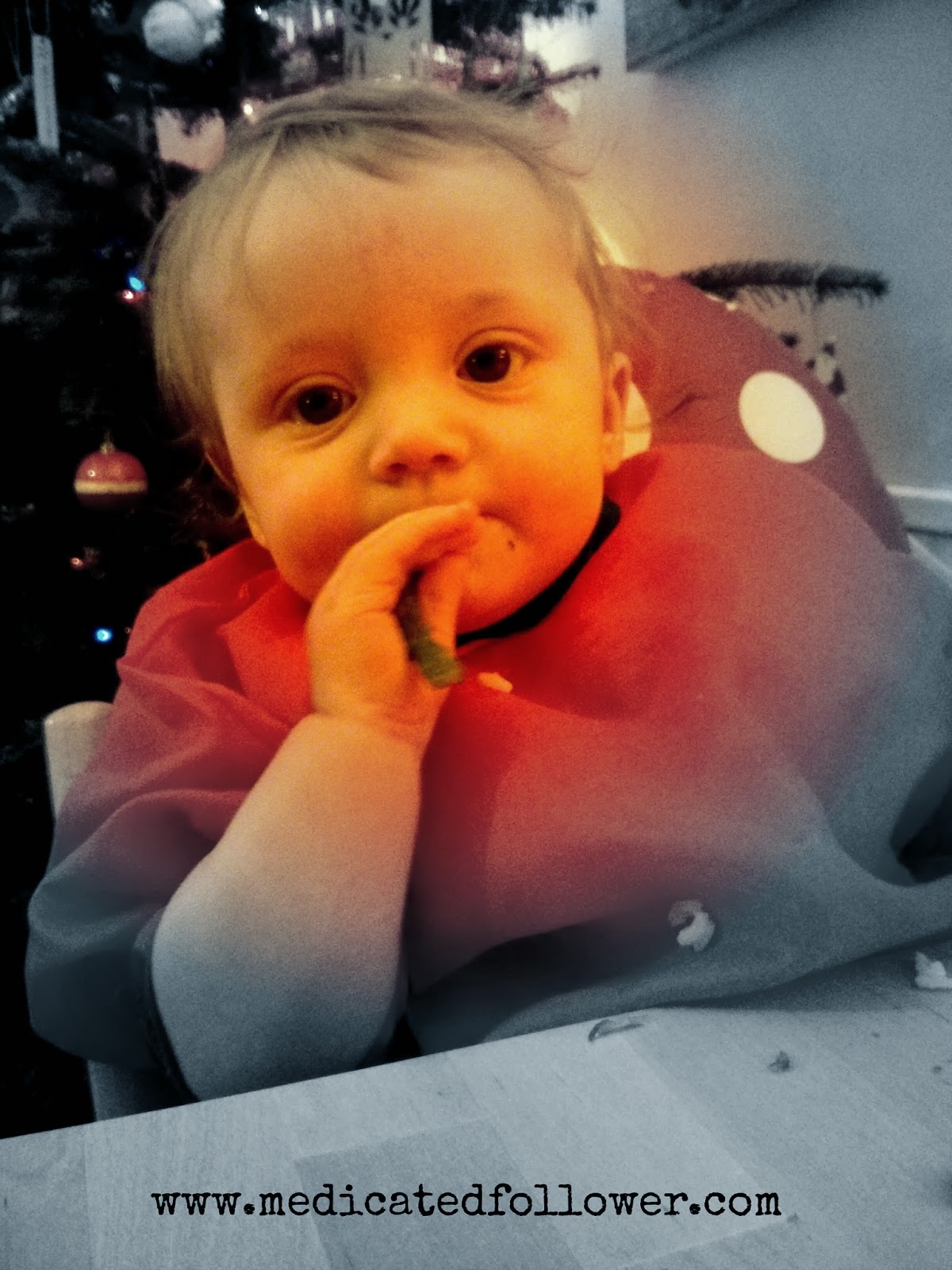 I do help Felix eat some of his food with a spoon.  Usually, if it's something soft/liquid like yoghurt, redibreck, soup etc.  I give him one spoon and I have another spoon.  He doesn't love being fed by me but as long as he has a spoon as well it usually works.  Most of his meals are finger foods though and every meal time more gets thrown away than gets eaten.  I feel like I might be coming up against something like the runners wall.  Do I keep on going?  Do I turn around and try another approach?

I thought I'd write my thoughts down, bounce a few ideas around, ask for some advice.  Here are my main concerns:

1) Nutrition.  Is Felix having enough to supplement his milk?  I know the mantra, "Until they're one, it's just for fun" but I have recently read various opinions that counteract this.  It is often said that breastmilk is the perfect food for babies and that up to their 1st birthday they don't really "need" anything else.  There is no doubt that it is full of fantastic things they need but it isn't a fantastic source of iron or zinc.  Felix, of course, is formula fed, and so, I'm not sure whether this applies.  I know his formula is a great source of vitamins and minerals including iron.  Perhaps he gets enough from his formula alone?  I keep swinging between feeling OK and worrying on this point..

2) Waste.  I hate waste.  Nothing makes me sadder than disposing of good food.  What can be salvaged, is salvaged.  If possible, I scoop it up and serve it again at another mealtime.  This isn't always possible though.  Sometimes I can leave stuff for Pete to eat when he gets home from work (he's always hungry after his bike ride!).  Sometimes I eat it.  If we're at my parents house, the dog might be able to eat it.  More often than not, though, it has to get thrown.  At least these days we have food waste bins and I know great things happen with our food waste.  We have a compost bin as well... but still, it makes me sad to see tasty food getting thrown away!  I tell myself this stage won't last long.. it' can't last long?  It still bothers me though.

3)  Poo.  This is a strange one, I'll admit.  One of the reasons I'm so keen for Felix to eat more solids is so that his poo will become firmer!!  It's selfish, I know, but with cloth nappies, there's a lot more hands on poo scraping involved and it will be so much easier when they roll off the fleece liner instead of me scraping it off with my "poo spoon" into the loo!  He's a 4 times a day kind of pooer as well.  I wouldn't mind so much if it were once a day!

4) Sleeping through.  He still feeds at night.  Heading towards 8 months old, formula fed and still feeds at night.  I know, it's selfish again.  I also know that solids and sleeping through don't go hand in hand, but there's always that voice at the back of my head "if he ate more, he might sleep through!".  He's managed to sleep 7pm - 6am 3 times I think.  Most of the time, though, he still wakes anywhere between 12am - 5am for a feed.  It's only once a night, I know it could be worse.  It's annoying though when I know breastfed babies that slept through from 8 weeks and there he is on his formula still not sleeping through.

5) When?  When will it change?  At what point will it click with him and he'll suddenly start understanding what food is for and actually want to eat it?  This is the one that troubles me the most really.  I suppose it's just a case of hanging in there, but it's so hard.  On top of all of the other things going on during my day, getting the boys up and dressed in the morning, getting out on the school run, food shopping, cleaning, washing, nappies, swimming classes, gardening, blogging...... it sometimes just feels like another stress, this weaning process! 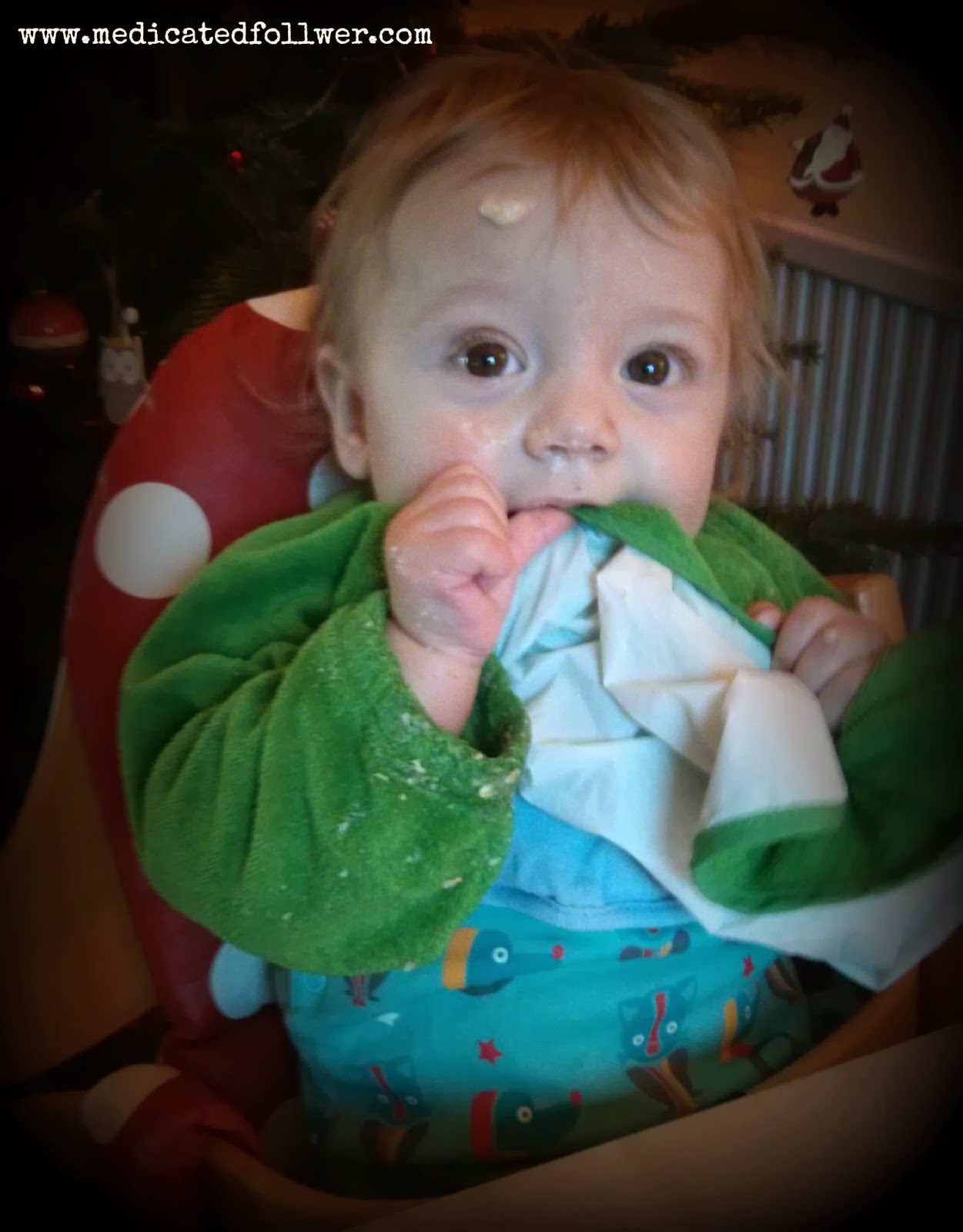 So.  Please.  I need your advice, your support, your stories.   Will it change?  It was so different with Ethan (I didn't know about BLW and it was over 4 years ago, it's amazing what you forget!).  Do I keep going?  I like that mealtimes aren't stressful for Felix.  It's that that keeps me going really.  Mealtimes were a battle with Ethan.  Felix isn't force fed.  I respect his right to refuse something being put in his mouth..  but I am his mother, it's also my job to see he gets what he needs!  Help!
Posted by Unknown at Sunday, January 12, 2014