I was recently contacted about a campaign run by Littlewoods, #MumsKnowBest.  Now, when growing up, it seems to many of us, I suspect, that our Mum's don't know best.  That in fact we do.. and then we grow up, have children of our own and realise that we actually know nothing.  Not. A.  Thing.  Our own Mum's though?  They become a walking encyclopedia of child knowledge.  A source of comfort, support and understanding.

I know that not everyone has a great relationship with their Mum.  Those of us that do are very lucky. I know that for me, I became to truly understand and appreciate my Mum when I myself became a Mum.  Suddenly I got it.  I realised all she and my Dad had gone through for my brother and I.  The pain and discomfort of pregnancy and labor.  Sitting up all night feeding, staggering around bleary eyed yet somehow managing to look after us.  Looking after the house with far fewer conveniences than I have!  A twin tub for washing countless terry towels, if she was lucky! No microwave.  No mobile phones and twitter for support!

I can't really share any stories from my teen years of where, actually, my Mum knew best.  Firstly, I was quite a good (boring) child and I never really rebelled.  But I think a lot of this has to do with the fact that for the most part, my parents just let my brother and I get on with whatever it was we wanted to do.  I think this respect they had for us and our ability to make our own choices was very supportive and something I want to replicate!  I'm not saying that my Mum never told me off, but I can honestly say that I can't think of a time when she told me that I shouldn't do something or that doing something would be a bad idea.  I think she saw that it would be good for me to sometimes make the wrong decision and then find out what the consequences would be.  I did a few stupid things like getting drunk.  My lovely Mum cleared up after me and supported me the next day.  I never caused too much trouble though!

My Mum is a pretty unique person.  I think that anyone who knows her would agree.  She didn't have the easiest start in life.  In fact, she was very poorly as a child and it wasn't really expected that she would make it through childhood.  She was severely ill with asthma and in the 50's and 60's asthma was a killer.  Of course, it still can be today, but I think it is generally better managed.  My Mum told me stories of being in hospital.  She spent a great deal of her childhood in hospital.  A few times they didn't expect her to make it through the night.  My mother is a strong person though and she battled through.  She told me how she lost all her baby teeth due to the medication she was on!  Her childhood was very different to mine.  When she wasn't ill in hospital she was at boarding school.  I think her upbringing made her fiercely independent and gave her a real lust for life.   Some of her stories from her teen years in the late 60's/early 70's are real eye openers.  I think she was a lot more exciting than I was!  She told me about how she used to hitchhike around with her friend..  Goodness only knows what she was up to! 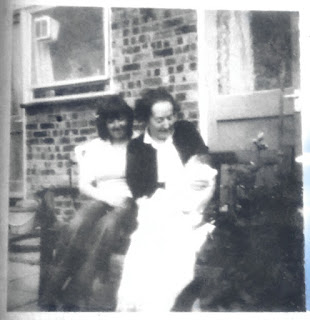 When she was 17 Mum moved up to London and studied to become a chiropodist.  She met my Dad who was working in Bristol at the time and they moved down to this part of the country.  My Mum remained a rather unique woman.  She was quite "old" when she had me, at 30.  This was 1982 remember and many women had already had their children in their early 20's.  Not only that, she went back to work when I was 6 months old.  As I said, my mother is very independent and likes to be busy.

What I really want to say about Mum is that not only do I know that she does know best (most of the time!) but she really knew what was best.  What would be best for me.  She has always gone the extra mile.  When I was 7 and started going to Brownies I was scared to go on my own.  She came with me, and not only that, she completed her guiding training and ended up running the Brownie pack!  She didn't force to me to continue doing things I wasn't happy doing.  When I told her that I wasn't enjoying ballet and gymnastics. she accepted what I was telling her and I stopped going.  No forcing me into things.   Mum is always thinking of others.  She would do lovely things like create special "holiday bags" for my brother and I when we went away, a bag with activities, some new toys.  She has always supported us and our community.  When I got involved with the Scout & Guide Band she helped out there.  She would come on marches with us.  When a teacher at my infant school seriously dented my confidence she got me into a new school and made sure that I had the support I needed at home and at school to get my confidence back.  I know my Mum always has my back. 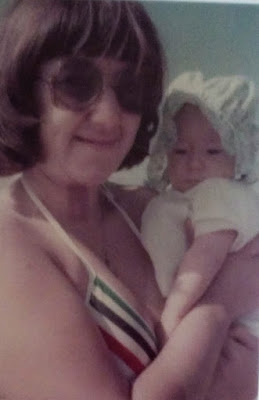 About 11 years ago Mum started having some health issues.  She was having some problems with her sight.  As is typical with my Mum she had been keeping a lot of this to herself but then there came one day when she could no longer ignore it.  Mum was still working almost full time, running her own chiropody practice as well as being an active member of the local W.I. and running a Rainbow pack.   She made an appointment at the doctor just to check things over... and then life changed.  The doctor recommended she go straight to hospital.  She was rushed up there.  I was at the hairdressers after finishing work when I got the call from my Dad telling me that Mum was in hospital having tests.  I rushed home, my heart in my mouth.  Dad had come home, he picked my brother and I up and we headed straight back to the hospital.

Being in the hospital family waiting area was one of the most grim times of my life.  I've never had a great relationship with hospitals because the only times I've ever been in them, something bad has been happening.  There is a great deal of noise in hospitals.   They are manic and overwhelming.  Seeing Mum lying down in a hospital bed was scary.  My Mum remained outwardly calm and in control but I have no doubt she must have been worrying in her head.  Who wouldn't be?  She had to have a lumber-puncture and scans on her brain.  I will never forget when the consultant came to see Dad, my brother and I in the family room.  My brother was in tears.  Dad looked scared and in shock.  I seemed to go into some sort of autopilot taking control.  We were all convinced he was going to tell us it was a brain tumor.  Thank God it wasn't.. but it wasn't nothing.  They believed Mum had MS.  It's very hard to diagnose MS and in fact, doctors don't really like to give it as a diagnosis.  You have to display a variety of symptoms and at different times.  A neurologist will look for areas of scaring in the central nervous system.

It wasn't great finding out about the MS.  Better than a tumor or other illnesses perhaps, but MS has still come along and changed our lives.  Mum never went back to work ever again.  She had to sell her practice and "retire" before her 50th birthday.  This disease has robbed her of the ability to work until an age of her choosing.  Whilst she remains the spirited fighter she has always been, she hasn't been able to do all she had planned.  Mum always talked of becoming a councilor for the local council when she retired.  She wouldn't be able to do that now.  Traveling further than Europe is not possible so she has had to accept that she won't see America, Australia and other places she might have wanted to visit.  She can't walk as far or for as long as she used to.  Driving anywhere other than the town in which she lives isn't possible.  She has to go to bed early every day and rest every afternoon.

Mum still does A LOT.  She wouldn't be the same if she didn't!  She runs book groups, studies geology, attends church, Mothers Union, volunteers in a child contact centre, helps run a toddler group and likes to be involved with my two boys as much as she can.  I hate that MS has changed how she would like to be living her life but I know that she has had to make her peace with it.  I know that she still does all she can.  So, whilst I cannot share stories of when I did something silly and Mum told me it was silly and she was proved correct I can tell you that I know my Mum does know best.  She shows me every day what is best.  Keep trying.  Keep doing things.  Don't let life hold you back.