So.  Here we are.  Despite the stresses, strains (or straining!) and stains of first few days, we have somehow made it to day 13 of Potty Training.. or Potty Learning as I'm now going to call it (thank you Sarah!).

A bit like all stages with babies and children, I did not think I'd get to a stage where I'm feeling like I can relax about Ethan not having a nappy on.  Yes, he still has the odd accident, but it's so much more manageable than those first few days.

To be honest, the first day wasn't so bad.  It was the end of that really lovely sunny patch we had, so we were out in the garden the whole day with Ethan naked from the waist down, so it was really easy for him to realise when he was about to pee.  It was a lot harder when the weather got bad again!  Has anyone else found that when they don't have pants on they seem just fine taking themselves to the potty, but as soon as you stick pants and trousers on they seem to forget to go by themselves and have far more accidents.

I would say the first day was OK, a lot better than I was expecting. The next five days after that were harder, with maybe 2-3 accidents a day, one of which would be poo.  Then we had five days where we had no wee accidents at all, but one or more poos a day in pants.  Yesterday we had the first poo in the potty since starting training (lets forget the fact that for two weeks prior to starting proper "potty learning" Ethan was doing a poo in the potty ever morning before his nappy change!).  All I had to do to achieve this feat was to promise Ethan his very own Slinky Dog (Toy Story fame).  Bless him, he sat on the potty for nearly 10 mins and produced a poo in the end.  Whilst sat on the driveway (I was vaccuming the car!).  I was very VERY impressed.  Despite this, no poo materialised today (Wednesday) but there weren't any in the pants either.  So maybe he just didn't need to go.. we'll see what happens next!

We have had a few wee accidents again over the last couple of days.  If I don't remind him to go every couple of hours and he's distracted then it happens.  Is it OK to be reminding them still after nearly two weeks I wonder?  I suppose there are no right or wrongs.  I don't want to hassle him.  Even now I doubt myself as to whether starting potty training/learning now was the right move.  I find it hard to back away now though.. it has to be said, even if I am reminding him to go and sometimes bribing him with a chocolate button, We're still using far less nappies, saving us money.  Better for the environment as well!  And the bin is far less stinky... 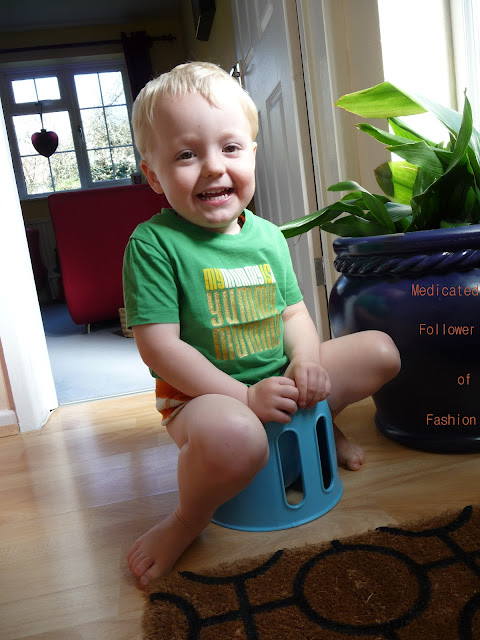 I have a few essentials now beyond the potty and training seat for the loo.  I bought six pairs of Bright Botts training pants (click here for their website and here to see them on Amazon) because I read excellent reviews for them on-line.  I can't recommend them enough.

They look like normal pants, are lovely bright colours, but have the added bonus of helping contain accidents.  They don't contain a massive wee, but they give you enough time to get things cleaned up before there is loads of leakage all over the place.  Ethan has had two wee accidents whilst wearing them and whilst each time the wee has leaked on to his trousers, it hasn't spread anywhere else.  He wasn't sitting in a pool of wee.  The training pants and his trousers were enough to stop it spreading or pooling.  Made clearing up when he had an accident at a toddler group much easier!! The other reason I bought them was because many reviews mentioned that they hold poo accidents much better than a normal pair of pants.  It was this that really sold them for me.  As Ethan was (and possibly still will....) pooing in his pants at least once a day, this is essential.  I can confirm they really do the job.

I LOVE THEM!!  Yes, they set me back £20 but I totally think they're worth it just for the peace of mind..

The other now "essential" item I've invested in is a "piddle pad".  Two infact.  One for the buggy and one for the car seat.  These are made and sold by a lovely eBay seller called Bussy Bots.  Quite simply, they are fleecy pads with a waterproof terry towelling inner.  They have a cut out to fit around harness straps.

The details provided by Bussy Bots (who make them - it's a cottage industry) are as follows:

"Machine washable at 40 degrees and unlike some other pads can be tumble dried.


Soft outer layer of fleece which is great at soaking up liquid yet still can be dry to the touch.


Section cut out for buckle strap."


Now.. I've been using the pair I bought (in the space fabric - Ethan loves it!) have been used every day since I bought them.  I always make sure there's one on the car seat and in his buggy.  So far, he's not had an accident whilst on them, but that's not to say it won't happen!  Ethan had a nap in his buggy yesterday, two hours he was asleep.  He stayed dry (I'm only putting a nappy on him at bedtime) but he may not have done.  This reassured me the buggy wouldn't be too much of a mess if he did have an accident.  The same goes for the car seat.  Between the training pants and the piddle pads (love that name!) I feel fairly relaxed about possibly accidents.  Peace of mind is invaluable for a worrier like me!  I wholeheartedly recommend these as well, especially if like us, you are out and about a lot, but want to avoid pull ups and nappies.


I would really love to know what other peoples potty experiences have been.. please do comment and let me know!
Posted by Unknown at Thursday, April 12, 2012