Magpie Monday - Clothes for the future..

Last week's trawl of the charity shops in mine and my parents town was not very lucrative... hardly anything jumped out at me, and I went to a good 7 or 8... There were a couple of coffee cups in a branch of St Peter's Hospice that were nice, but they were asking £7 for each cup which I thought was really far too much for a charity shop.  Anyone else found this with St Peter's Hospice?  I find their prices are by far the highest.  When I was in there last week they were asking for £7-£10 for dresses that looked worn, and £8 for used shoes.  I just think it's crazy.

Anyway.. I did have a little success in the end in one of the other charity shops.  I got lucky in their children's clothes section.  I managed to get three totally unused items - a pair of Next shorts, a practical pair of cords and a GAP polo shirt.  They are all age 5-6 (Ethan isn't even 3 yet) but they cost me just over £4 for the lot, which I thought was a bargain, and well worth the storage space. 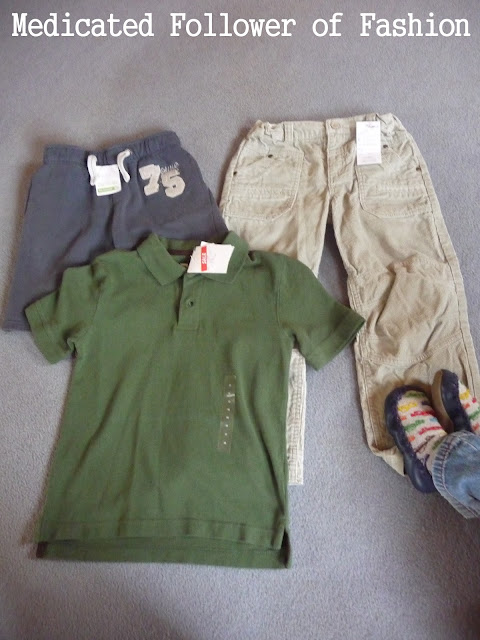 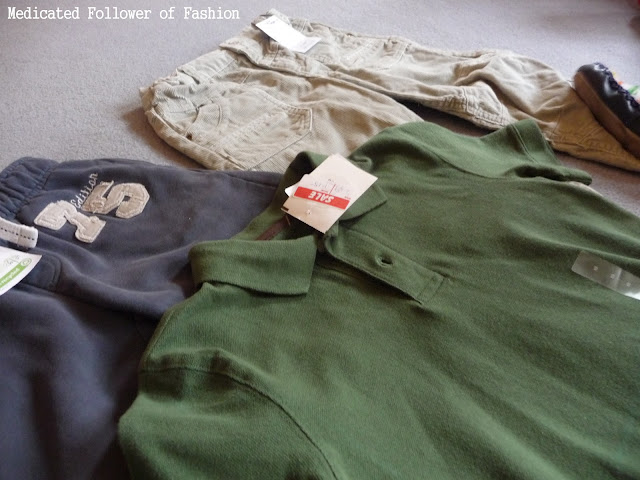 It has to be said, they aren't the most exciting items of clothing ever, the colours aren't very inspiring, but they are practical, worth the money and hopefully won't be out of style by the time Ethan is big enough for them.. something like a polo shirt is a classic look that will stick around.

My apologies for Ethan's feet in the first photo, I couldn't get him to keep out of the way!

I'm linking this post up with MissieLizzie for Magpie Monday.  Why not pop over there and see what everyone else has found this week?
Posted by Unknown at Monday, March 26, 2012