Sorry seems to be the hardest word...

It's happened.  For the first time we've had to instigate the naughty step.  I've managed to get away without using this for quite a while really.  I've noticed recently though that unlike before, when I've had a word with Ethan about his actions if he's done something naughty, he just hasn't been "getting it".  He'll avoid eye contact, so you know that he knows he's done something wrong.  But he won't say sorry.  Oh no.  That word won't escape his lips.  He used to say it.  Sometimes without true meaning, but he would say it. 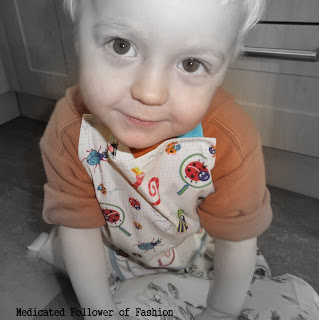 Butter wouldn't melt....
I think he's trying to push boundaries to see what he can get away with.  I don't want to be a harsh disciplinarian.. but equally I don't want a completely unruly child.  I prefer the get down to their level and explain why their actions are bad approach.  But what do you do if they look away and ignore you?  You have to get their attention.

This Wednesday Ethan threw a very heavy door stop from upstairs all the way downstairs.  It was an extremely dangerous thing to do.  Not only could it have damaged the walls or something at  the bottom of the stairs, if there had been someone else in the house with us and they had been down there where it landed, they would have been badly hurt.  This thing is heavy!  I had to get through to him how bad it was, but Ethan wouldn't look at me.  So, I thought, this is it!  There has to be some sort of consequence.  I told him that as he  refused to apologise, he would have to sit on the naughty step and explained the concept to him.  I sat him at the bottom of the stairs.  He tried to get up.  I sat him back down.  He asked to watch Cbeebies.  I said no, told him he has to sit there for 3 minutes and think about why he is sitting there.

It was really awkward.. I couldn't really leave the hallway because I knew he'd get straight back up, so I had to stay there, trying not to look at him whilst keeping my eye on him.  When his 3 minutes was up, I went over and sat next to him.  I asked if he was ready to say sorry.  He still wouldn't say it.  I asked if he would give me a hug as a half way and he happily did so.  I'm not sure if this was a cop out.  I'm new to all this!

Later on in the afternoon, I could hear Ethan playing with his toys.  He was saying to them "No! No!  Don't throw anything that is heavy! It's dangerous! Don't do it!".  Hmmmm, I thought.  Something must have gone in then.

At tea time, he was chattering away when suddenly he looked at me and said "Sorry Mummy.  I sorry".

Bless him.  My heart melted.

I hate this aspect of parenting.  I suppose most of us do.  The cuddles, the playing.. that's the fun stuff.  Trying to make sure you don't raise a total A Hole.  That's the tough bit!

What are your tips for discipline?  How does it work in your household.  Did you use a trial and error method to find out what works?  Any tips... I'd be glad!
Posted by Unknown at Friday, February 10, 2012