Where we live there are far too many charity shops.. no really, there are.  The high streets are literally lined by them in all the towns round here.  Some of the charity shops seem to price items very highly these days.. many's the time I've been in charity shop and found Primark items priced higher than they would have been originally!!  Craziness... I'm all for supporting charity, but I think you'll put people off if you ask them to pay too much.

Despite this, there are a couple of charity shops in our town where you can be sure to find a clothing bargain almost every time you step through the door.  I am not at all concerned about wearing second hand clothes, and Ethan doesn't have an opinion as yet (being 2 and a half!).  Children's clothes can be pricey and we all know they go through a lot.  If you spend a little time, between charity shops and eBay your child can wear some pretty nice togs but at half or less their original price.

One of my favoruite tops bought during one impressive charity shop I'm going to be featuring today: 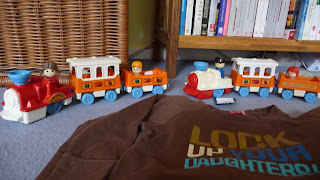 So... this cute t shirt is by No Added Sugar,  a very funky brand who are known for their message t shirts/tops that are always obvious and often a conversation starter.  Ethan's one says "Lock up your daughters!" and whenever he wears it we always get loads of comments (positive I may add!).  This set me back 50p.  It was in nearly brand new condition.  Brown isn't the most exciting colour, it has to be said, but the message on the T is really what it's all about. 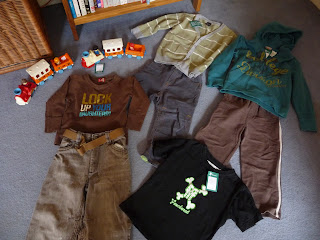 As you can see it was part of a decent sized haul from the same charity shop which included a Boden hoody, a Fenchurch t-shirt, a Next cardigan, a pair of Vertbaudet jeans, a pair of Next tracksuit bottoms and a pair of H&M cargo pants.  The whole lot cost me £4.50. 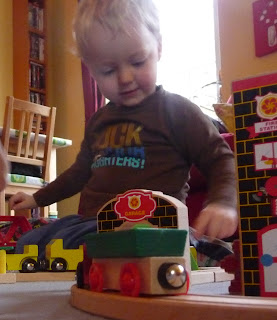 Ethan loves this t-shirt and I do too.. I strongly recommend having a good trawl of the charity shops near you when you get the chance... you never know what bargain might be waiting for you!

Don't forget to go and see what the other trendy toddlers are strutting around in this week!
Posted by Unknown at Tuesday, February 14, 2012