Ah, Friday is here again!  Horray, another week has been "got through".  Don't you just hate that?!  "Getting through" something.. the trouble is that for many of us it is like that, whether it's getting through a week at the office or getting (struggling) through a week at home with the children.  Luckily for me, I only have one.  Though he is a demanding little so and so at times.

Ethan feels very sorry for himself today.  He's told me so.  In his words "I feel ill and small today Mummy".  Poor thing.  He is full of snot and has a horrible sounding cough.  Really sore sounding.  Doesn't even want his breakfast.  That's never a good sign.  In fact, I've had to break out the "med med" in the daytime which is something that almost never happens.  We've come over to my parents house now and he's livened up a bit (guess I'm just not that exciting!).  It means I can write this and have a quick coffee though.  Joy!  The sun is out as well.  It's bloody freezing, as it is everywhere in the UK (and beyond) at the moment, but at least it looks cheerful out there.

This is Ethan's "I'm sorry for myself" face: 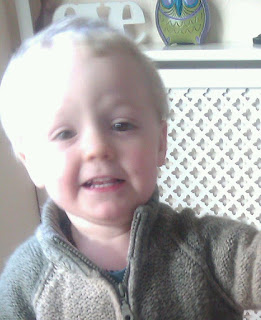 I apologise for the quality.  Our camera is bust at the moment and I only have my phone.  5 megapixels is ok, but not that amazing!

I was wondering what I could share with you today.  I have a few potentially great blog posts swiming around in my brain, but I want to be able to do them justice and don't think there's time to write them today... Soooo... well, I'm at my folks house, and I'm right next to the bookcase and I've just seen the book in which my Dad had some poems published in in the '70s.  So, I'm thinking I'll share one of the family gems with you.  Get ready, this is a cracker:

The Wart
A puckering of skin
A clover leaf shape
A wart lies therein
Rejection and hate.
A growth of dead tissue
A black blood clot
An ugly wart issue
Infection I've got.
An explosive injection
A pouring of blood
A cauterisation
The treatment was dud.
A few weeks later
It's back there again
Only this time it's greater -
Who's to blame?
A decision postponed
Too late to amend
I'm wart festooned
O, this is the end.
Now, truth be told, I actually think this is a pretty good poem.  Well done Dad, good effort!  And it was published, so that's impressive too.. but come on.  It's a poem about a wart!  A WART! It's a family joke now, as I'm sure you can well imagine.  Quite often, when one of us decides we want to tease my Dad we just have to utter the words "The wart!  A puckering of skin!" and everyone decends into laughter... A bit like the Fanny by gass light saga but that's another story... Oh, OK.  It's not that interesting.  It's just that when Dad was at school in the '50s he tells us they put on a performance of Fanny by gaslight.. and we like to tease Dad because we think he may have played the part of Fanny.. I know, it's so childish...

Well, I do hope my family in-jokes have made you chuckle on this cold, cold Friday.  Perhaps I should search out my poems from school... I seem to remember one I wrote was entitled "Agatha Twitchet and the Water Shortage"  hmmm... I think we're pretty odd poets in this family!
Posted by Unknown at Friday, February 03, 2012